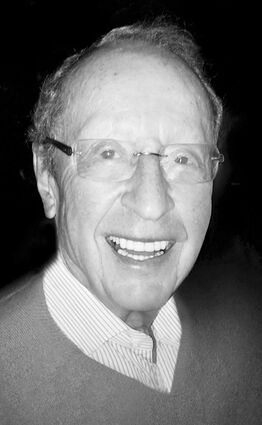 Frank was born as John Franklin Merritt in 1931 in Wabash, Ind., to Bruce J. and Helen Fudge Merritt. At a very young age he chose Frank as his name instead of John. He attended Wabash High School, where he played basketball, ran track and was in the choir. He also held a Master Mason degree from the Indiana Freemasons in Wabash, Ind. He attended Purdue University in 1949 and graduated with a bachelor's degree in civil engineering. He was a brother in the Acacia Fraternity, sang in the Purdue Varsity Glee Club and was a member of the ROTC.

He served in the U.S. Army of as a first lieutenant, Corps of Engineers, from 1954-56, stationed in Phalsbourg, France (a NATO airbase). Frank started his career working for Ingersoll Rand in 1956 as a technical sales manager in San Francisco. There he met his future wife, Sharon Louise Gibson. They had a very short courtship and were married Oct 17, 1964. He was then transferred to St. Louis, where he became a sales manager and raised his family. The rest of his career was spent in Hinsdale, where he became a regional sales manager. Frank retired from Ingersoll Rand in 1996. After realizing that he did not like the cold winters of Chicago, he moved to Pelican Bay, Naples, Fla., where he enjoyed his retirement and met a wonderful companion, Anne Woolard, who later became his fiancé.

Frank loved the St. Louis Cardinals. Upon moving to St. Louis, he had front row, third base season tickets and belted out the Star Spangled Banner in the crowd for all to hear. He was a member of Castle Oak Country Club in Chesterfield, Mo., where he was introduced to his beloved game of tennis and made many lifelong friends. He was an avid runner and enjoyed golf, walking and all outdoor activities.

After retiring to Pelican Bay in Naples, Frank became an avid tennis player and lived for his weekly bridge game with the guys. He became full of knowledge about the native plants of Florida as landscape director at Valencia in Pelican Bay and also grew to love and know the birds of Pelican Bay, especially along the berm.

A private celebration of his life will be held after the service, with provided at the service.

In lieu of flowers, memorials may be made online to https://www.woundedwarriorsofcolliercounty.com/campaigns/donate/