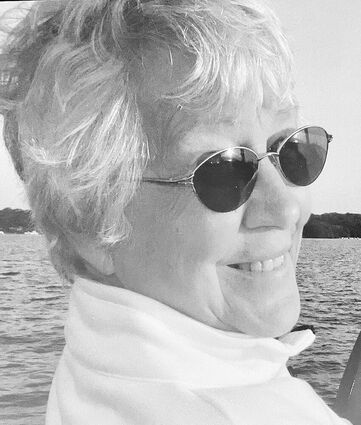 Joy Peterkin Rasin, 84, passed away after a brief and sudden illness, peacefully and surrounded by family, at the Moffitt Cancer Center in Tampa, Fla., on April 22, 2021.

Joy's great passions were politics, social justice, world culture and horticulture of all kinds, leading her to travel widely, read voraciously and engage deeply with all people and ideas until the very end of her days. Her commitment to the causes and people she most believed in was unbounded. She leaves a legacy of public service and philanthropy that will be remembered with gratitude by her family and many friends in her homes in Chicago; Naples, Fla .; Lake Geneva, Wis .; and beyond.

Joy was born in 1937, to Daniel Peterkin Jr. and Bessie Shaw Peterkin in Chicago. She spent her childhood in Chicago and Lake Geneva.

Joy attended the Latin School in Chicago, the Potter School in Arizona and the Westover School in Connecticut, before matriculating at Connecticut College for Women. Much later in life, she was delighted to receive an honorary doctorate from Elmhurst College.

In her early 20s, Joy moved to New York City, where she worked for the Bermuda Tourist Board and then NBC television. It was at a party in Manhattan that she met the man who would become her husband, soulmate and partner for life, Rudolph Stephen Rasin.

After their marriage in Chicago in 1959, the young couple first lived in Elkhart, Ind., before soon moving to Hinsdale, where they would spend the next 40 years, raising their three children.

In the 1960s and '70s, Joy worked for her friend, state Rep. Giddy Dyer, one of Illinois' groundbreaking woman politicians. It was during those hard-fought campaigns, played out against the historic divisions of the Civil Rights Movement and the Vietnam War, that Joy learned the tough lessons of local and national politics.

Believing that "all politics is local", Joy served as a trustee on the Hinsdale Village Board, where she chaired several committees. She also sat on the Elmhurst College Board of Trustees; in recognition of her many contributions there, she received their Founder's Medal in 1998.

Joy's adventures abroad - throughout Asia in 1972, the Eastern Bloc in 1975, China in 1980, Vietnam in 1992, and Cuba in 2012, just to name a few - sprang from her inexhaustible curiosity and love of people. She was also deeply involved in the Garden Clubs of Hinsdale and Lake Geneva; with Black Point Estate and Gardens, and Horticultural Hall in Lake Geneva; and with various nature conservancies.

Their children grown, Joy and Rudy left Hinsdale in 2001. They spent their later years living between Chicago, their winter residence in Naples, and their longtime home in Lake Geneva, "Flowerside". Its extensive gardens, designed by Joy over the course of 45 years, were recognized and archived by the Smithsonian Institution in 2002.

Upon Rudy's death in 2014, after 55 years of marriage, Joy conceived of and endowed the Rudolph S. Rasin Center for Global Justice at Westover in his honor. The Rasin Center has become an exemplar of its kind, and a pillar of the school's community.

In lieu of flowers, memorials may be made online to Black Point Horticultural Fund, care of the Greater Milwaukee Foundation, at https://www.greatermilwaukeefoundation.org/donors/give-online/add-your-fund/; or the Rudolph S. Rasin Center for Global Justice at https://www.westoverschool.org/rasin-center-for-global-justice/about-the-center or the Chicago Foundation for Women at https://www.cfw.org/.