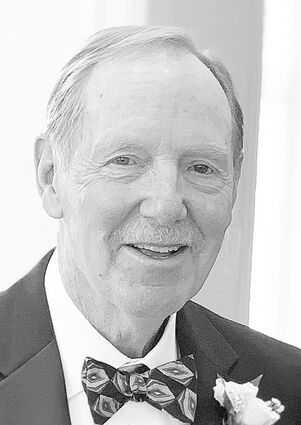 William "Bill" Townsend Weaver, 79, formerly of Hinsdale, died unexpectedly Dec. 27, 2022, as a result of Parkinson's Disease and complications from COVID.

Bill was born in Chicago in 1943 and raised in Hinsdale. A proud Red Devil, he graduated from Hinsdale Township High School in 1961. A member of the 1960-61 state champion golf team, he was named Illinois Junior Boys Golf Champion and was a member of the high school band (as well as a founding member of the Tom Cats, who notably played at the opening of Grant Square in Hinsdale). Bill graduated from Stanford University in 1965 and married Nancy Fleming the same year. They settled in San Francisco where Bill attended the University of California, Hastings College of the Law, graduating in 1968. He received his draft notice the night before he took the Illinois Bar Exam and shortly afterward began his military service in Vietnam, serving first as a chaplain's assistant and later in the Judge Advocate General's Corps.

Upon his return to Chicago, Bill joined Lord, Bissell and Brook, where he would spend his entire career as a litigator. He and Nancy settled in Hinsdale, where they had two children before divorcing in 1979. In 1982, Bill married Amy Sherrard. In 1986 Bill and Amy moved to Wilmette, where they raised their two children, as well as a succession of Labrador Retrievers.

A lifelong Cubs fan, Bill enjoyed few things more than an afternoon at Wrigley Field. His dreams came true in 2016, when the Cubs won the World Series. He also spent countless hours watching his children and grandchildren on the soccer pitch, the cross-country course and the baseball field A consummate athlete, Bill enjoyed not only watching sports but also participating in them. He shared his love of skiing with all of his children and spent Sundays golfing with his regular foursome.

Bill loved regaling his family with stories of the (mis)adventures of his youth. His eloquence, timing and wit captivated many a courtroom, dinner party and family gathering. A talented dancer, Bill taught Hinsdale's Fort Nightly ballroom dance class when he was young, and he never lost his touch on the dance floor.

He is survived by his wife, Amy Sherrard; his children, Kristin (Kenneth) Danzinger, Karin (Christopher) Rohn, Kelsey (Zach Lebowitz) Weaver and Matthew (Anna) Weaver; his grandchildren, Parker and Peyton Rohn, John and Joseph Danzinger, Baer and Charley Lebowitz and some eagerly-anticipated arrivals due in March; and his sister, Nancy Keel.

Friends and family are invited to celebrate Bill's life any time between 1 and 4 p.m. Sunday, Feb. 5, at The Lawn at the Wilmette Golf Club, 3900 Fairway Drive, No. 1088 (casual Chicago Cubs attire is welcome).

In lieu of flowers, memorials may be made online to the Michael J. Fox Foundation at https://give.michaeljfox.org/donate.