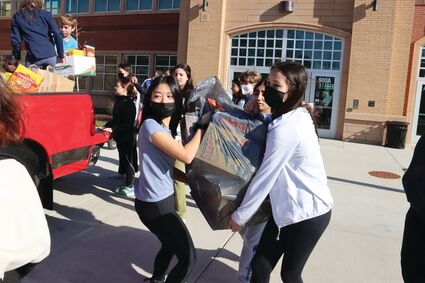 Over stuffed - Hinsdale Middle School students Adeline Hsieh, Kara Groom and Zaara Singh bring out several of the more than 600 boxes of cereal that were collected Thursday morning at HMS. With a half dozen squad cars filled to the brim, the Hinsdale Police Department had to put out a call to the Hinsdale Fire Department to come to the rescue with another vehicle to help with the pick up. The food collected from all nine District 181 schools weighed in at 7,374 pounds, which was double what was collected last year. The Lane School was the district champion, collecting 1,074 pounds, which was the most pounds per student. The food was donated to HCS Family Services for its food bank. Please turn to Page 24 for more pictures. (Jim Slonoff photo)