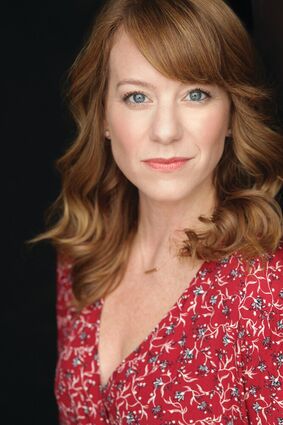 Looking for a good Agatha Christie murder mystery as an escape from the late-winter blahs?

"Death on the Nile" is in theaters now, with a blockbuster cast led by Kenneth Branagh as Hercule Poirot.

And then there's the First Folio production of "The Secret Council" on stage at Mayslake Peabody Estate in Oak Brook. The adaptation was written by First Folio's co-founder and executive director David Rice.

The film and the play were both scheduled to run a year ago but delayed due to the pandemic, Rice said.

"I will ride that kind of fortuitous timing as far as it will take me," Rice said. "There is no bad time to do an Agatha Christie."

The First Folio play is based on one of her earliest novels. Rice said his motivation for choosing the work was two-fold.

"Agatha Christie stories sell like crazy," he said. "They are always amongst the most popular shows theaters can produce."

Existing adaptations, with casts of 10 to 15 people, are usually too expensive for small theaters to stage, Rice said. So he began looking at some of her earliest works.

When he read "The Secret Council" and met Tommy and Tuppence, he knew his search was over.

"It was exactly the kind of fun core story that I was looking for," he said. "I will say that I've definitely taken some liberties with the original story and adapted it for modern audiences, modern sensibilities."

One of the changes he made was making Tuppence more of Tommy's equal than she is in the novel.

"She's a really fun character to inhabit," actress Melanie Keller said. "She is such a fast thinker, and I feel like she doesn't get knocked down by anything - or if she does, she bounces back up again. She's always got the right comeback. In my life, I don't, but she always does."

Keller, who admitted she's often surprised at the end of whodunits, said she thinks audiences might struggle to figure this mystery out before the final curtain falls.

"Agatha Christie wrote a very complex story and I think David has done a really good job of distilling the important threads. There are a lot of threads to pull on," she said.

Rice said his favorite thing about the show is its pacing.

"There is literally no stop in the action," he said. "The scenes blend one to the other. The scene changes are integrated as part of the storytelling.

"It comes in at two hours, so it's a quick bit of entertainment and audiences are having a blast. I guess that's what I like most - listening to the audiences have fun."

Keller said the show is a blend of style and substance, with some of that substance generated by the relationship she and actor Andrés Enriquez create for their characters, Tuppence as Tommy.

"These two characters do have a journey over the play, and when they feel like they might lose each other, they realize what their real feelings are," she said.

The last play Keller did before this one was in Key West in April 2019. She said being before an audience again is weird and awesome and returning to the stage is kind of like riding a bike.

"Once we were on stage doing the show, that part came right back, but the schedule of rehearsing a play and the brain power it takes is something I had definitely forgotten and my body had sort of forgotten," she said. 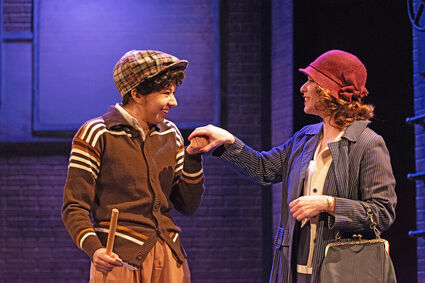 Tickets for the show, which closes Feb. 27, have been selling well, Rice said. And subscription sales for the season are up 22 percent.

"I am very happy with the way everything is going," he said. "Audiences made it very clear to me that they feel safe at our place. We are requiring vaccination proof. We are requiring masks. Our cast and staff are all vaccinated, boosted, masked - except when they are on stage, of course."

After months of sitting on the couch watching Netflix, Keller said she thinks people will enjoy being engaged in a live production.

"It's a really fun ride and there's a lot of ingenuity in the design and the direction, and I think it's the kind of play that audiences enjoy because they are piecing it together as they go," she said.