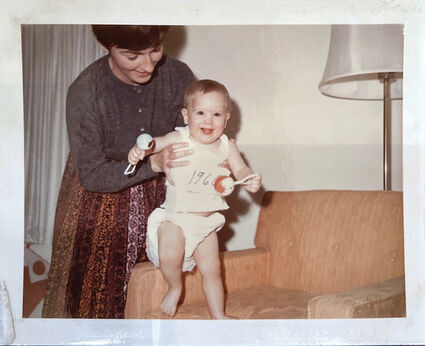 Mary Catalano, a longtime Hinsdale resident who moved to Burr Ridge last year, was adopted as a baby. Catalano said giving birth to her first child, Sean (right), stirred her desire to search for her birth family. She found two half-siblings and other relatives but has yet to meet them due to the COVID-19 pandemic. (photos provided)

Mary Catalano still has "The Chosen Baby" book her parents gave her for Christmas in 1966 to help her understand adoption.

"To our chosen baby, precious Mary Margaret. All our love, Mommy + Daddy," its inscription reads.

"I've known ever since I was born," Catalano said. "I've always known I was adopted so it was nothing new. I was always open talking about it. It wasn't something I tried to hide."

Growing up in Gwynedd Valley, Pa., Catalano didn't have a desire to find her birth parents, but she did wonder about them sometimes.

"I've always liked a good story and a good puzzle, so I was always like, 'What did they look like?' You come up with different scenarios about where you came from," Catalano said.

She also had questions about her medical history, which she addressed by taking extra precautions, such as getting her first mammogram at age 30 and seeing a cardiologist when she was 40.

"It was just because I had no family history. I didn't know," she said.

Her curiosity led her to initiate her first search in the late 1990s, while she was still living in Pennsylvania. She contacted Catholic Social Services to obtain information. The $100 fee they requested didn't sit well with her, and so she abandoned the effort.

When she and her husband, Chris, moved to Hinsdale 22 years ago and started their family, her feelings changed. Her adoption took on new meaning when her oldest child was born.

"I looked at him and I said to my husband, 'Wow, this is the first person I'm meeting that I'm actually biologically related to," she said. "I never thought that it was something that was always in the back of my mind until then."

Catalano revived her research, turning this time to the Internet. Her starting point was the name of her birth mother, Helen Kenny, which was on the original birth certificate she obtained when records laws changed in Pennsylvania. She eventually pieced together that Helen had been married to a Jerry Lavelle and had two other children. She also discovered that Helen had died, and tried unsuccessfully to contact Helen's brother. After he died, she read the names of two people she believed to be her siblings in his obituary. She reached out and Helen's son Gary, who lives in Tennessee, replied right away.

"Within an hour, my half-brother, he reached back out to me on Facebook and gave me his phone number and said, 'Hey, if you want to talk, I'm free the next hour,' " she recalled.

She was nervous to make the call, of course, but had no fear of rejection.

"They can't dislike me - they don't even know me," she recalled thinking. "There were decisions made 56 years ago that I had nothing to do with. I had no control."

Her conversation with Gary went well, and he was able to fill her in on more of her family's story. Helen and her first husband, David, lived in Scotland when Gary was born. They later moved to the U.S. and split up. Helen then had an affair and became pregnant with the baby she would place for adoption. On learning of her pregnancy, Helen's mother-in-law and a priest threatened to have her deported back to Scotland if she refused to give up the baby. And they would take custody of her son.

Helen complied. After the baby was placed, she found herself living with her son Gary on her own.

"Jerry, her younger brother-in-law, has been coming over to help out," Catalano said. "They fall in love and get married."

Helen and Jerry have a daughter, a half-sister to Gary and to Catalano. Catalano reached out to her as well, but has not received a response.

Gary didn't have any information about Catalano's birth father, and it wasn't until she sent a DNA sample to ancestry.com that she was able to learn more details. She discovered she shared DNA with a "Levell" family and spoke first with a cousin named Karen. Later she was notified of a match with a half-sister, Dawn. Karen's and Dawn's fathers were brothers, but they had had a falling out and the cousins didn't talk much.

From Dawn Catalano learned Helen had an affair with a man named Clement Levell, who had since passed away.

"They had the same last name but spelled differently," Catalano said. "All of this happened in the fall of 2019, and then COVID hit. I haven't met anybody."

The Lavelle/Levell happenstance isn't the only strange coincidence in Catalano's story. It turns out Gary was in the same graduating class at Villanova University as her husband, Chris. She attended Villanova as well, graduating two years later in 1987.

Catalano said she holds no bitterness toward Helen for giving her away, knowing how she would feel if she had to give up one of her own three children (Sean, 28, Kaile, 26, and Matt, almost 24). 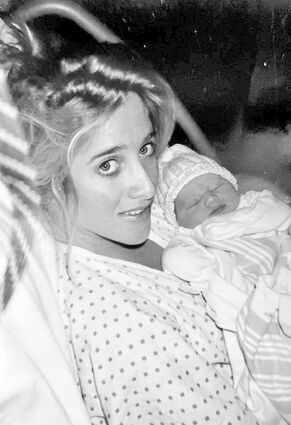 "She sounds to me like she was a survivor," she said of her birth mother. "She did what she needed to do for her family."

Catalano said she looks forward to meeting her birth family when it is safe to do so.

"Absolutely I would like to meet them and talk to them," she said. "They seem like wonderful people. Even though they're biologically related, they are strangers, but you do feel, at least I felt, some type of instant connection."

And she's happy to have learned more of her own story.

"I feel like I have an idea where I came from," she said. "My parents who raised me are my parents and I came from Pennsylvania, but it's nice to know a family history."