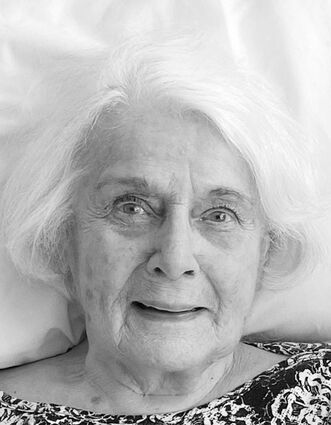 Joan was born in 1930 in London, England, to Henry Jones and Lilian Johnson. She never knew her parents as they both died when she was very young, something she often lamented in her later years. She became very attached to her grandmother Mary ("Gran"), who was an absolute rock to both Joan and her sister, Binnie, caring for them as youngsters and through the wartime Blitz in London. When Gran died in 1943 the two sisters forged ahead together, teenagers figuring out how to survive independently during wartime. They not only survived but built family legacies for which they both should be very proud. Joan met the love of her life, Jim Cullen, shortly after the war when she visited his sister. They married in 1951, arriving home from their honeymoon with only £100 to their name. From those humble beginnings, they built a wonderful life and family together. In 1974 when Jim's career took an international turn, she and the family moved to the United States, settling in the Chicago area. Jim's business travel took him away for extended periods, but she quickly made new friends. She became an amazing and adept hostess for the many visitors from all over the world who passed through her home.

Perhaps because of own her challenging start in life, she always made family her priority. She was there for everything - birthdays, graduations, Thanksgiving, Christmases, babysitting, family vacations, you name it. Quietly generous, she treated everyone alike (well, most of the time). "Equal and the same" was a favorite motto. Despite leaving school at 13, she was smart, well-read and no slouch at Scrabble, crosswords or "Jeopardy" answers. She played a mean game of cards and crushed many of her opponents at Double Rummy. She also had a great sense of humor, often at her own expense, and carried that with her to the end. In short, she was simply a flat-out terrific person who loved deeply and was deeply loved in return.

She is survived by her two children, Steve (Lisa) Cullen and Jane (Todd) Kirk of Hinsdale; five grandchildren, Rachel, Samantha, Alex, Lisa and Emily; and many nieces and nephews.

Services will be private, followed by cremation.

In lieu of any flowers, memorials may be made online to the Breast Cancer Research Foundation at https://www.bcrf.org.