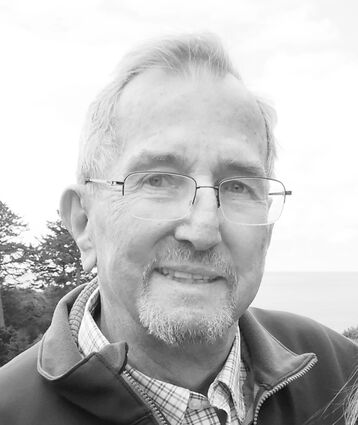 Bob was born to Jacob and Marian Reininga in 1932 in Oak Park. He was the youngest of four children, following his three sisters Ruth, Jean and Carol. He received his chemical engineering degree from the University of Colorado in Boulder in 1954 after first spending two years at Cornell University, during which he was an active member of the rowing team. He later obtained an MBA from the University of Chicago in 1965.

He served in the Army and was stationed in Germany briefly after graduation from Colorado. On Aug. 17, 1957, he married Suzanne Marie Axt of Oak Park. They raised three children, Karen, Krista and Peter. Bob and Suzanne were married for 52 years before Suzanne's untimely passing in 2009.

Bob began his career as a chemical engineer for Universal Oil Products. After 13 years, he transitioned into work as a successful and respected investment analyst within the oil and gas industry, initially for Harris Bank of Chicago, and later for himself under the business name Reininga & Co.

Bob was a very kind and generous man, devoted husband and loving father. While his first love was spending time with family, Bob's other passions included attending Northwestern University football games and Portland Thorns soccer matches, jazz music and bicycle riding, which he continued into his early 80s. At the age of 50, Bob completed RAGBRAI, a bicycle ride across the state of Iowa. He was also a very active member of the Downers Grove bicycle club and enjoyed their weekend rides, charity fundraisers and social activities. Both Bob and Suzanne were lovers of nature, birds and the outdoors and were supporters and frequent visitors of the Morton Arboretum in Lisle.

In later years, Bob lived in Portland, Ore., near his daughter, Krista. Bob's positive spirit and warm, friendly demeanor were always on display during his work on the Welcoming Committee within his retirement center, where, due to an abundance of the name, he was known lovingly as "Chicago Bob," a moniker he cherished.

Bob was preceded in death by his daughter, Karen; and his wife, Suzanne.

He is survived by his son-in law, Pete Volgenau; his son, Peter; his daughter, Krista (John) DeVoe; his grandchildren, Tom, Dan, Laura and Krista Volgenau, Annie and Will DeVoe, and Grace and Lilian Reininga; his great-grandchild, Erin Volgenau; and his former daughter-in-law, Elizabeth Berkley, Funeral services are pending.

In lieu of flowers, memorials may be made online to the Morton Arboretum at https://www.mortonarb.org or a charity of choice.