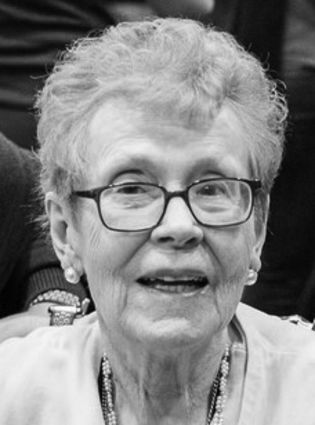 She was born in 1928 to Emily and Arthur Sjoholm in South Chicago Heights, the second of three girls. She earned a bachelor's in chemistry in 1950 and worked as a chemist at Argonne National Lab. There she met her future husband, Everett, a lifelong resident of Hinsdale. They were married 53 years until his death in 2007.

Soon after marriage, the happy chemists had three daughters very close in age. Mary Lou became a stay-at-home mom for their early years but returned to work when they went to school.

She was a substitute teacher while she accumulated teaching credits to become a grade school special ed teacher. She earned her master's in education from National Louis University in 1978 at age 50. She later moved into the classroom, teaching first and third grades for a number of years until she retired in 1988. After retirement, she taught part-time at the College of DuPage.

One of Mary Lou's passions was traveling. She tediously planned a vacation every summer for her family and covered 45 of the 50 states. She had a passion for nature and geology, and her highest priority was visiting the National Parks. Once retired, she branched out to world travel and toured more than 40 countries in far reaching places, from Norway to New Zealand to Chile and to her favorite, Kenya. She traveled to every continent, reaching the last one, Antarctica, on her 70th birthday. On many of her trips, she took her bicycle and rode hundreds of miles in the beautiful nature she loved.

After retirement, Mary Lou continued her favorite pastimes – golf, bridge, biking and cross country skiing. She played golf well into her 80s and bridge until she was 91. She also enjoyed volunteering for Meals on Wheels and HCS Family Services, among other charities. She took pleasure in being a part of Downers Grove Friends of the Library and gave many travel talks in libraries and retirement homes.

Online condolences may be made at https://www.powellfuneraldirectors.com.