Governor's announcement Tuesday means high school sports are off, at least for now 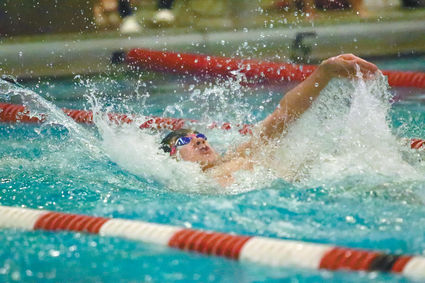 Boys swimming is one of four winter sports at Hinsdale Central that has been put on "pause" as the Illinois Department of Public Health tries to get a handle on the rising number of COVID-19 cases in the state. (file photo)

"It's been really hard and I think the hard part is not having an answer for the kids and not being able to give them that resolution," she said earlier this week. "That's what I wish I could give them. I hope on Thursday we get some guidance so that we know."

Instead, she got an answer Tuesday when Gov. JB Pritzker announced the state would move to Tier 3 mitigations - the most restrictive - on Friday. That means all winter sports - boys and girls basketball, boys and girls bowling, girls gymnastics and boys swimming - are on hold. Wrestling already had been moved to the new summer season.

"We remain optimistic that these new mitigations, coupled with the emergence of a vaccine, will aid in creating participation opportunities in the new year for IHSA student-athletes in winter, spring and summer sports," Craig Anderson, IHSA executive director, said in a statement released Tuesday afternoon. "The IHSA Board of Directors will meet as scheduled on Nov. 19 to continue plotting out potential paths for IHSA sport and activity participation through the remainder of the school year.

"We have asked Dep. Gov. (Jesse) Ruiz and Dr. (Ngozi) Ezike (IDPH director) to engage with us in the near future, so that we can collaborate on developing a plan to safely conduct IHSA sports and activities as soon as possible," Anderson added.

Bob Barber, who coached and girls varsity swim and diving team to great success at sectionals a few weeks ago, is unsure the boys team will have that same opportunity.

"I think the frustrating thing, having already seen it work once, is that we've only been given two days with this next group," said Barber, who is the varsity head coach for both teams.

He was running team tryouts Tuesday when he heard the news. The new measures don't go into effect until Friday, so he will continue to conduct tryouts, which he's running at 25 percent capacity, for athletes who are comfortable attending.

"We're going to go business as usual here for the next two days and let the families make the decision as to whether they want to send them here during that time," Barber said Wednesday. "That way we can articulate what we think the pause consists of in person. I think that message is better."

"The vast majority of them have been given information from their insurance (carriers) and lawyers saying they should not be moving forward with basketball because they would not be covered, going against the IDPH guidelines.

"We've been given the same information as other high schools," he noted.

He worries about the impact on athletes who compete in spring sports, who lost their season earlier this year.

"We've already canceled a spring season and it would be unfair to have anything affect their season when we know that a lot of them, under (Tier 2) guidelines, would be able to compete," Jones said.

Interest in boys and girls basketball during open gyms in September and October - before the sport was reclassified - was high.

"I think we had over 80 kids register in the fall for all three levels," boys varsity head coach Nick Latorre said. "I think the kids are anxious to play and any opportunity they are getting to play, they are playing."

Persinger said her numbers were up at the open gyms this year.

"The kids need that outlet, I guess, to get in and get that physical exercise and to do something and be part of something," she said. "I think it was really awesome for them to have that opportunity. It was precious to them to be in the gym and to be with their teammates and to be playing."

With summer camps canceled, Persinger said she enjoyed the opportunity to check in with the girls.

"To me it was just so nice to have that time with them. It had been so long," she said.

Even before Pritzker's announcement, Latorre said he wasn't sure what the right answer was.

"There is just so much unknown and so much differentiation in what is healthy, what isn't healthy," he said. "Obviously the numbers are horrible right now and the number of cases are off the charts. I honestly don't really have an opinion."

Barber said he's not sure what the "pause" ultimately will mean to the boys swim team and other athletes who compete in the winter season.

"Nobody has a return to play date," he said. "It could be early December at the earliest, it could be January or so on or it could be done."