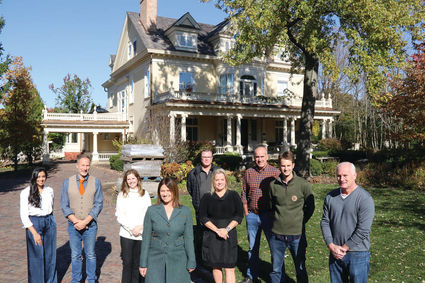 Jennifer Reenan (front, green coat) appreciates the team that worked on the two-year renovation project, including Aarti Patel, Ari Smejkal, Elizabeth Krueger, David Post, Laura O'Brien, Mike Abraham, Joel Rafferty and David Knecht. "They are all just fantastic men and women," Reenan said. "It was a pleasure to come in and check on their progress and get to know them better." (Jim Slonoff photo)

Less than 24 hours after a fire destroyed most of their 119-year-old home at 329 E. Sixth Street in Hinsdale two years ago, the Reenans were getting ready to rebuild.

Jennifer Reenan's first call after the April 11, 2018, fire was to David Post at EIS Group to handle mitigation. Her next call was to Michael Abraham, an architect who had worked with previous owners on renovations to the home. He and Reenan did their first walk through the day after the fire.

"Everywhere you walked you were kicking up dust and debris," Reenan said.

"We were in shock," Abraham said, noting that he had watched the blaze with a good friend of the previous owner. "We were practically in tears."

Abraham's first task was to gather information about the house, both from previous renovation projects and the Hinsdale Historical Society.

Reenan and architect Joel Rafferty, who works with Abraham, met at the historical society to see what they could find on the house, a past recipient of a Hinsdale Historic Preservation award and is on the National Register of Historic Places.

"It was really fun to go through these old photographs," Rafferty said.

Other documentation turned up from unexpected sources, such as a neighbor who had photos of a wedding she attended at the house in 1961.

As was the case with mitigation the work was time-consuming.

"It was two or three months of going backward before we could go forward," Abraham said.

The photos provided valuable details that guided the drawings.

"If you look at the second story facade, you'll see that it looked different before the fire," Reenan said. "We were able to actually recreate what it was when it was originally built."

Once the plans were ready, the job was handed over to lead contractor Dave Knecht of Dave Knecht Homes. The transition was a smooth one, thanks in part to the work Post and EIS did, Knecht said.

"He did a very nice job up front of saving samples, saving doors, getting things organized, keeping the historic components of the house that we could reuse," he said.

Knecht, who specializes in custom-built homes and renovations, was thrilled to take on the project.

"It's really a once-in-a-lifetime job," he said. "For me, that is what I have a passion doing, historic renovation and rehab.

"You have to have a homeowner that is committed," Knecht continued. "There are not many people who would say, 'We are going to bring this old home back to life.' That enables us to do what we do.

"All the improvements were done with the goal of having someone walk through the house and not being able to tell any kind of the modifications that had been made," he added.

Knecht brought in a group of experts to help with the project, including Ari Smejkal of Hammer Design Group, with whom he's worked for 25 years.

"He's like, 'I've got the perfect job for you,' " Smejkal recalled of Knecht's invitation to tackle the basement.

"One of the things I wanted to show is you can have an incredible basement in an old house," Reenan said.

The original home included a billiard room, and the Reenans wanted to add a cozy pub in homage to Neal Reenan's Irish lineage.

"We found really cool materials that are something you can't get," Smejkal said, citing the tamarack pine floor as one example. "A lot of the wood I had on hand from collecting over the years."

Smejkal also discovered the perfect compliment to an area under the basement stairs.

"Ari found this metal grill with roses on it and created this darling little door with roses," Reenan said.

That same attention to detail guided the work of interior designer Laura O'Brien of O'Brien Harris, who initially joined the team to give an estimate on the cabinetry that had been lost. Like others, she was on the scene early.

"The water was still dripping through the ceiling," she said.

She ended up working with Reenan and Elizabeth Krueger of EK Design on the key rooms that included millwork - the kitchen, butler's pantry, bathrooms, dressing room, closets, mudroom and laundry room.

"The thing that I loved about the project is that Jen wasn't a slave to the history of the house. We're weren't combing through books trying to recreate an era," O'Brien said.

Reenan appreciated the attention to how the cabinetry would be used in the various rooms, noting that O'Brien measured her tea boxes to create an appropriate storage space for them in the kitchen.

Krueger said the group of professionals who came together on the project made the work thoroughly enjoyable. 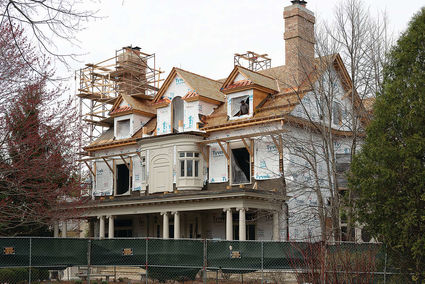 The third floor of the Reenan's home had to be completely rebuilt following a 2018 fire, and the inside was gutted as well. Jeff Ediger of Oak Brothers Historic Renovation works on one of three stained glass transom windows found in one of the walls. An artist recreated the rectangular windows below, which brighten the stairwell going to the second floor. The billiards room (top right) in the basement was restored, and the lower level now also includes a cozy pub area and this tasting room and wine cellar. (photos courtesy of Karen Knecht)

"You feel like you're shoulder to shoulder with exceptional talent, and that makes our work better and it makes our experience better," Krueger said. "We get to learn from everybody in the process, too. None of us comes into this knowing the exact answer or how it will come together. We just know that it will."

Reenan said it was important for her and her family to create a home they would be comfortable living in.

"We've got three kids and two dogs and we wanted it to be very relaxed, but obviously still honor the architecture, which is very unique and elegant," she said.

The mix of historical inspiration and practical application resulted in a wonderful finished product, O'Brien noted.

"I think the beauty of what happened here is it was restored classically, but it still feels like a young, vibrant family lives here," she said. "It feels like you are walking into something classic that has a history."

Aarti Patel of EK Design echoed that satisfaction of incorporating the family's lifestyle and heritage into the house.

"There's a lot of history, even to your family, that is presented," she said.

Reenan hopes sharing her renovation project will help encourage others to save Hinsdale's beautiful old homes, especially in the Robbins Park Historic District where she lives. Homeowners can have the best of both worlds, Krueger noted.

"It's now a new house but it still feels old," she said. "That's the best part."