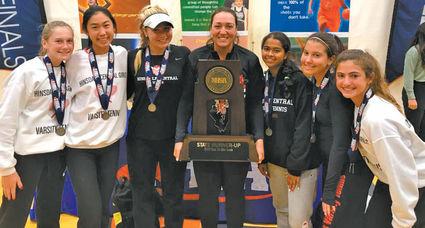 Last year, the Hinsdale Central girls tennis team brought home the IHSA state championship - the program's 18th overall - with 23 points earned. At this weekend's state tournament in Buffalo Grove, the Red Devils blew past that total, racking up 33 points. This season, however, that meant runner-up honors to Lake Forest's tally of 39.

Such are the vagaries of the state finals, where the complexion of the competition, like the weather conditions, changes from season to season. But the fact that four of Central's six-member contingent were underclassmen - all first-timers at state - speaks volumes about the sheer talent in the ranks.

"It was just a really young team. I had two freshmen playing singles, and my second place (doubles) team was two sophomores," said head coach Shawna Zsinko. "I think we scored more points than I thought we were capable of."

Freshman Nicole Hu placed fourth in singles, while sophomores Katie Dollens and Zoe Limparis were second in doubles. Right behind them in third was the senior tandem of Sarah Badawi and Caroline Kotarski. Freshman singles player Prachi Shah drew a tough bracket and lost her two matches (see Page 45 for full results).

Having only three point-generators is not ideal, Zsinko noted, but those sources were prolific as all made it to the semifinals. That meant all earned results commensurate with or better than their tournament seedings.

"This year we won every quarterfinal match. I think that was a huge accomplishment for the team. I thought that was awesome," Zsinko said.

Hu showed poise in her state debut, winning four straight-set matches and dropping only 10 games before being upended in the semis by eventual champion Kiley Rabjohns of Lake Forest.

She expressed pride at her performance.

"I thought that I would make it to the round of 16 or the quarterfinals," Hu said. "I was playing really well, and I also had my coach and my parents there, so that was a big help."

The intensity level of the tournament was eye-opening but also motivating, she noted.

"I think it helps have the focus and the determination and the right mindset for a tournament like this," Hu remarked.

"I had a good feeling about Nicole when I looked at the draw. But you never know what's going to happen," Zsinko said.

Like receiving the stunning, and incorrect, news that Hu had lost her second round match. Officials fixed their mistaken posting, but not until 20 anxious minutes had passed.

"They sent shock waves through the tournament," Zsinko said.

Determination is the characteristic Dollens and Limparis demonstrated as they battled their way into the doubles final.

The combo has been clicking, and capturing the sectional title two weeks ago (over Badawi and Kotarski) provided a timely confidence boost.

"We just had really good chemistry together and good communication on the court," Dollens said. "We're just really aggressive players at the net and at the baseline, and we just go for our shots and play smart."

Their semifinal pitted them against familiar Lake Forest foes. Dollens and Limparis won the first set but were down in the second when their resilience kicked in.

"We just knew we had to fight back and do everything we had to to win and just not make errors," Dollens said.

Limparis said they kept their eyes on the prize.

"We didn't let our nerves get the best of us and we just played our game," she said. "We wanted to be in the finals more than them."

Zsinko said the two came through in a big way

"They really had to focus and play. Those (quarterfinal and semifinal matches) were probably the two biggest matches for us," she commented.

"I was happy for Sarah and Caroline puling through," Zsinko said. "They were nervous and they had to work through some of that."

Kotarski, who missed last year's state final after an emergency appendectomy and the 2017 tournament with a torn rotator cuff, relished the experience. She said the competition's real test is between the ears.

"Coming home each day, we're sleeping in the car because we needed to be up at 5:30 in the morning," she said. "It was just so much more mentally exhausting than physical."

Playing with "best friend" Badawi was a great way to conclude her Central career, Kotarski added, as was finishing on a winning note.

"The whole team was out there supporting us," she said.

In the last 14 seasons, the Red Devils have won 10 titles, three seconds and one third-place finish. But even a perennial power like Central can take nothing for granted.

"A lot of those matches could have gone either way," Zsinko said "I told the girls that nothing is just handed to us and you've got to fight for every point. It's a lot of pressure. It's hard to defend titles.

"All in all, I was really pleased with everyone fighting hard," she added.

Hu said it's bittersweet knowing her senior teammates will be moving on. But she looks forward to seeing what she and her teammates can achieve.

"I think we do have a really great team, and I think our bond means we can all count on each other. I felt like I was part of a community," she said. "I had a really great experience."