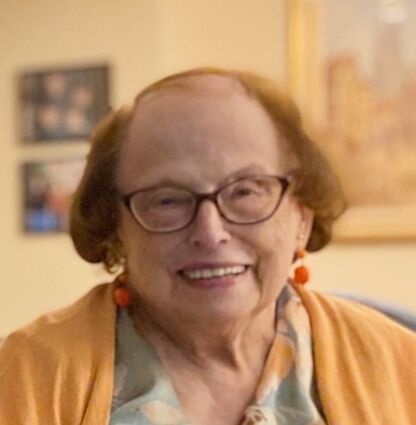 Lorraine was born in Edmonton, Alberta, Canada in 1929 to Dr. Raymond and Mrs. Helene Rosedale. She grew up in Canton, Ohio, where her father was a successful plastic surgeon.

Lorraine met the love of her life, Jim Wolfe while she studied and graduated from Trinity University in Washington, D.C. They were married Dec. 29, 1951, at St. Peter's Catholic Church in Canton. Lorraine continued onto Kent State University for advanced study in the field of audiology and speech therapy.

Lorraine and Jim raised their family in Clarendon Hills, Hinsdale and Oak Brook. Lorraine was a loving and devoted mother while also being an active volunteer in the church and in her community. She taught CCD at St. Isaac Jogues as a young mom, served on the welcoming committee, was a Eucharistic minister and served as a chaplain for bereavement.

Lorraine served on the Hinsdale Assembly Board for many years and was active in Catholic Charities, The Cancer Institute at Rush, the Service Club, the Hinsdale Auxiliary Board, Big Shoulders and Hinsdale Village Gardeners. She was program director for the Collectors Club and enjoyed it tremendously, served the board of Hinsdale Bank and Trust's and was a longtime member at Hinsdale Golf Club.

Lorraine was a wonderful partner with Jim as he pursued a successful career in the railroad industry. She was a hostess and organizer for receptions, conferences, business car trips, black tie events and company functions.

Lorraine was a founding member of Wellness House in Hinsdale following Jim's death in 1988. She served on the board for many years. She believed in its mission to help those living with cancer and their loved ones. She was known for always carrying Wellness House brochures and ready advice for anyone who needed it.

As active as Lorraine was, her family was her greatest pride and joy. She was surrounded by grandchildren and great-grandchildren daily with visits and phone calls. She was happy to give advice and kept confidences with all of them. Lorraine was a loving and wonderful example to her entire family of how to live a good and full life.

Lorraine was preceded in death by her husband, Jim; her two granddaughters, Keely and Moira Creber; and her siblings, Dr. Raymond Rosedale Jr. and Yvonne Rosedale.

A funeral Mass will follow at 11 a.m. at the church.

In lieu of flowers, memorials to may be made to Wellness House, 131 N. County Line Road, Hinsdale, IL, 60521 or online at http://www.wellnesshouse.org