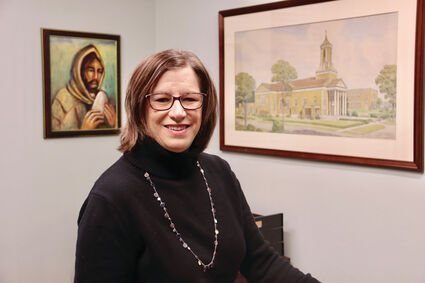 Whether as a student in its classrooms, a worshiper in its pews or an employee in its offices, St. Isaac Jogues Church has always been part of Lara Krupicka's life.

Now a resident of Naperville, Krupicka makes the drive to Hinsdale four days a week to work in the church office. Every Monday through Thursday she takes phone calls, answers parishioners' questions, completes payroll, composes the weekly church bulletin and takes on special projects, including the creation of the church's new website.

It was Krupicka's knowledge of computers that brought her back to the church as an employee 28 years ago.

In need of someone to help the staff navigate the church's new Macintosh computers, they called on Krupicka.

"It has definitely evolved," Krupicka said of her role at St. Isaac Jogues, but computers are still part of the job.

A University of Illinois graduate with a degree in marketing, Krupicka's computer training didn't happen in a college classroom or fancy computer lab. Eager to learn about programming, Krupicka, then Lara Seman, took her first classes at a local Radio Shack store.

She said her computer abilities are partially gained through education and partially through her willingness to dive in and problem solve.

Krupicka's life in Hinsdale was precipitated by traffic on Route 83. As her father made his way to and from work along the Kingery Highway back in the 1970s, Krupicka said he noticed an "idyllic park" to the east, near the West Hinsdale train station.

"They bought a house in that neighborhood," Krupicka said, and eventually moved across the street from Stough Park - the one her father spotted on his daily commute. Her parents lived in that house for 40 years, raising five children there.

While studying marketing in college, Krupicka said she also found every opportunity to practice creative writing. She went on to freelance for several suburban publications and today authors a blog, "The Reluctant Naturalist", which can be found at larakrupicka.com. Through her blog Krupicka writes about setting and reaching goals, family milestones and her family's love of travel. She also explores her own cautious curiosity about the great outdoors.

"I'm constantly reading books on the benefits of nature," she said, but most of those books are currently enjoyed while surrounded by indoor comforts. She recently purchased a membership to the Morton Arboretum and is studying trees and bird calls in preparation for more outdoor exploration.

"That kind of information makes it more enjoyable to be outside," she said.

But Krupicka doesn't always stay close to home. She recently helped her daughter move to London and plans to join another daughter in Thailand later this year.

Even as a layperson working behind a desk, Krupicka said she feels like part of the church's mission to serve its parishioners.

"We're ministering to people," she said.

Having been at the church for so many years, Krupicka said she knows when someone calls simply for someone to talk to.

"Part of my job is being a listener," she said.