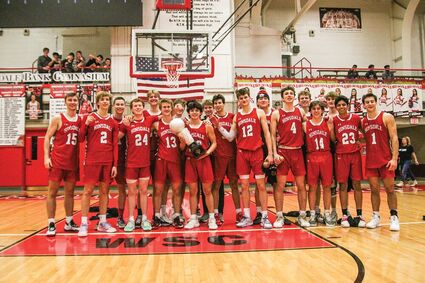 The boys varsity basketball team poses with its trophy after beating Oswego East to win the Hinsdale Central Holiday Classic Dec. 29 for the first time since the inaugural tourney in 2015. (photos courtesy of Adam Pitra/AWP Photography)

The varsity Red Devils took it to another power last month, winning the title in the tourney, which dates back to 2015, for the first time in program history.

Varsity head coach Nick Latorre said winning the championship was not a goal the team had set.

"We just try to play our best and play unselfishly and play really hard and however it works out is what we live with," he said. "We played well and we played really good teams all the way through."

The team was excited to take on the Wolves, senior guard Ben Oosterbaan said.

"We lost in triple overtime to them in the semifinals of the tournament last year and we lost to them in both Thanksgiving tournaments," he said. "We were definitely excited that was the last time we were going to face them and we wanted to get the last laugh."

"Most impressive was the way he rebounded the ball, and I think he had seven or eight assists in one of the games," Latorre said. "He was a stalwart defender and along the glass. That was the key, the way we guarded and rebounded and took care of the ball."

Oosterbaan said it felt great to be named MVP but was quick to credit his teammates' efforts as well.

"I didn't have a great game in the championship and they picked me up," Oosterbaan said. "It felt deserving, but they really had my back there."

"He defended the other teams' top players and he was rebounding the heck out of it and showed great leadership. He had a really nice tournament," Latorre said.

"All the hard work paid off since I've been in fourth grade playing Inferno (travel basketball) with these guys," Collignon said. "Through the whole tournament, the whole team played tremendous defense - the best defense."

On the offensive side, senior guard Emerson Eck had a great game against Oswego.

"I think he made five threes," Latorre said. "He was also really tough on the glass the entire week. We were kind of waiting for him to have a breakout shooting game, and he had one in the championship. It was nice to see."

"That felt pretty good - especially after we won - to get the honor. It was nice," he said. "I shot well (against Oswego) and thought the whole team played well to get the win."

Evan Phillips, with only two turnovers in four games, was "off the charts good," Latorre said.

"I think just winning the championship was a blast," the senior guard said. "I've been going to that tournament since I've been in elementary school, watching Central play."

Latorre also noted the play of Billy Cernugel, and Pat Graham, who scored 15 points against H-F.

"It's a huge difference," he said. "You feel the energy throughout the gym. A big 3 at home vs. away, it's a lot different. You have to give credit to our bench as well. When they bring the energy, our team just plays a different style."

Graham, a senior guard, appreciated being the first Central team to win the title.

"We came close last year, making it to the semifinals," he said. "It was cool winning it, because the whole town got to experience it for the first time."

Latorre credited all his players for making a difference, whether they were on the court or on the bench.

"It was a really good team effort all the way through," he said. "We had 20 guys on the roster contributing." 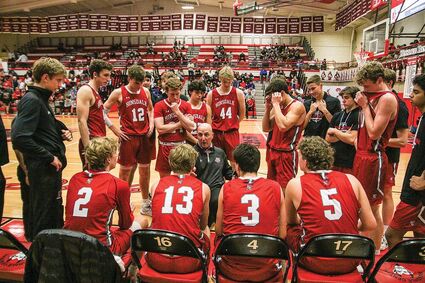 Varsity coach Nick Latorre said his team responded well to having to change the opening day of the tournament from Dec. 23 to Dec. 26 due to bad weather.

"it's a fun time of year because the prep leading into the tournament is hectic and the kids are super busy with getting ready for finals, and then it's kind of a nice relief to just focus on playing," he said. "I like it for that - it's just basketball."

Eck praised tournament manager Joe Spagnolo for his part in creating a great experience for the teams.

"Everything outside of the games is perfectly run by Coach Spagnolo and the rest of the crew at Hinsdale Central," he said. "It was run so professionally by Coach Spags that it felt like we actually won something big."

Winning the title should give the team confidence moving through the rest of the season, Latorre noted.

"It's at least proven to our guys that we're capable of playing at that level," he said. "If we can sustain that level of play, it sets us up. You've got to continue to work hard to play at that level. That's our focus going into the new year."

Here are the remaining four Friday night home games, all of which start at 7:30 p.m.

The Red Devils followed up winning the title at the Hinsdale Central Holiday Classic with two wins last weekend, taking down Downers Grove South 65-38 at home Friday and Downers North 48-46 on the road Saturday.

The starters talked about what the team learned during the holiday tournament and their outlook on the rest of the season.

“I think we learned to trust each other a lot in that tournament, and we picked each other up during that tournament. Everybody seems to be locked in, and that started in the second half of the first game of the tournament. I think now we are just playing tougher.” — Ben Oosterbaan

“I think the Christmas tournament has really boosted us into conference play. We had a big win against Downers Grove North this weekend, which set us up really well in conference. We’ve got to keep playing our game and see where it goes.” — Emerson Eck

“I feel like moving forward we’re a lot more confident because we know we’re capable of beating and playing against high-level teams. Before the tournament, we had a couple of upsetting losses. I feel like we learned how to become more focused and better prepared.” — Patrick Graham

“Right now we’re feeling great. Our coach emphasized not to get complacent and keep pushing. Right now everyone on the team feels like we’re in a really good spot. We’ve got some big conference games coming up, so we want to keep on rolling.” — Billy Cernugel

“We really set ourselves up to be really successful this season. After the games this weekend, we have to keep working, stay humble and hungry, as our coach said, and keep growing together as a team, and we’ll see where the season takes us.” — Chase Collignon