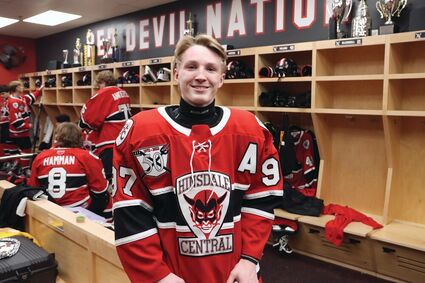 When did you first start playing hockey?

Around the age of 2 I first stepped on the ice. My brothers played. It's like a family thing. My mom's dad was a coach, so it just kind of ran in the family.

Just the environment, team bonding, going to the rink every day, seeing the same faces. It's more of a team sport than any other sport I've ever played.

What other sports have you played?

I played lacrosse for a little bit and then I played a little soccer growing up. It was never my thing.

What is the most challenging part of playing left wing?

Having to defend in the D zone and also breaking out the puck. That's really tough. It's always on the wingers to get the puck out of the zone. And you're all over the place in the O zone getting the puck.

Do you have any pre-meet rituals or routines?

I know it sounds weird, but I have some funny underwear I like to wear before games.

Be positive on the bench. Negativity on the hockey bench can ruin a team's morale.

I'd like to win the state championship. It's going to be at the United Center, so just to get there would be huge. Personally, be an All-Star for our Illinois West League. That would be huge.

I have suited up as a goalie in hockey and I'm actually not too bad at that.

I want to try to play juniors. I've heard from a team in Minnesota called the Minnesota Mullets. I'm still looking at my options.

Why does coach Spencer Anderson like having Dufort on the team?

'Seabass' is a well-rounded player and one of our top scorers. He is competitive but humble. What I like most about him is his desire to put the team first, and he always has a smile when he comes to the rink. Hockey is a game and games are supposed to be fun. I can tell Sebastian has fun when he is at the rink.