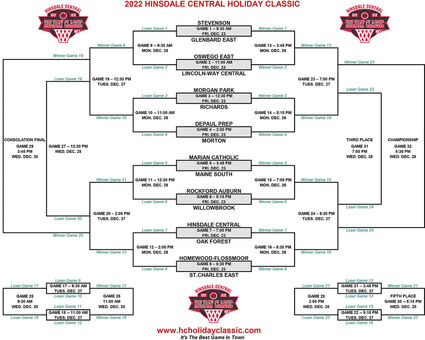 The seventh annual Hinsdale Central Holiday Classic will tip off tomorrow, setting in motion what has become one of the top winter break prep basketball tournaments in the Chicago area.

Sixteen teams representing 15 different conferences will vie for the tourney crown over four days - Dec. 23 and 26-28 - in Central's gym at 5500 S. Grant St. (see the bracket for the schedule and teams participating). The field includes eight programs that won 20 or more games last year and eight conference champions from 2021.

Hinsdale Central athletic director Dan Jones predicted the 2022 HCHC edition could be the best yet.

"Every year it's competitive, but this might be the most competitive year we've had since we began the tournament," Jones said. "For the most part, everyone has a chance to win every game."

The inaugural 2015 tournament featured defending IHSA 4A champion Stevenson High School and Crespi Carmelite, the title holders of California's Division IV. The fact that more than half of the teams that played in that first HCHC - including Stevenson and, of course, Hinsdale Central - are still in the mix speaks volumes about the event's quality, he suggested.

"They all say it's one of the best because of the amount of talented teams and talented coaches playing games like this in December so they're ready to play big games at the end of the season," Jones said.

Jones, formerly athletic director at DeKalb High School, had hosting experience after helping run DeKalb's Chuck Dayton Holiday Classic, the longest running tournament in the state. In a piece previewing the 2015 event on http://www.hcholidayclassic.com, he expressed confidence that the formula could work here.

"I believed that if we hosted a tournament at Hinsdale Central, with our gym, facility and location, I thought we can have something pretty special that can be around for many years," Jones said.

He tapped Joe Spagnolo, an Illinois Basketball Coaches Association Hall of Famer and longtime director of the Proviso West Holiday Tournament, to manage it. Spagnolo, in that 2015 preview story, said he was attracted to the mission of the HCHC to feature a broad representation of schools.

"There was certainly a void that was needed to be filled for a tournament that had a balance of teams with different styles from different locations," Spagnolo stated. "We wanted to build some long lasting relationships and went after programs that have been very successful and others that we know were on the rise with some great underclass talent."

The vision has worked, and Jones, hosting his last HCHC before retiring at the end of the school year, encouraged the community to come witness some great basketball so close to home.

"We have one ticket price for all day, so come in and watch as much as you want," he said.

Tickets are $8 for single-day admission. A tournament pass good for all 32 games is $25. Tickets are available at the window or online at http://www.hcholidayclassic.com.