They are the champions! 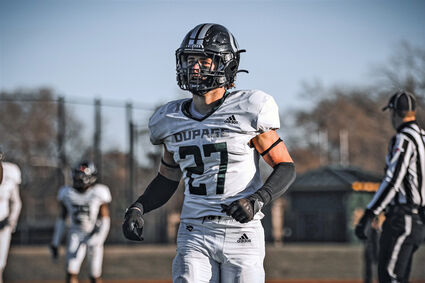 After taking two years off following his 2020 graduation from Hinsdale Central High School, Guy Goss made the right decision to get back on the gridiron. He helped the College of DuPage beat North Dakota State 14-12 Dec. 3 in the Red Grange Bowl at COD's Bjarne Ullsvik Stadium to earn its second consecutive National Junior College Athletic Association Division III title.

For Goss, this was the biggest stage on which he had played.

"I think every player, you might have the butterflies and nerves before the game," he said "Once you start playing and instinct takes over, you don't really worry about it.

"I kind of got into a flow state and really started making plays and was lucky enough to strip that ball at the end," he added, referring to his three tackles, four assists and a sack.

Goss, a stand-out player for the Red Devils, was named defensive player of the week twice this season and was third in solo tackles with 36 prior to the championship game.

A trip to upstate New York to see his twin brother, Owen, play for Colgate University prompted his decision to get back on the field.

"I went to a game where he was playing Boston College," Goss said. "I wouldn't say I was jealous, but I was like, 'I really miss it,' and I thought it was the right decision for me to go and train and play again. It took a lot of hard work and a lot of time."

Before he graduated high school, he had talked to COD coaches about playing there. Fortunately, they were still interested and invited him to join the team.

"I think originally it was very hard to go and get back into the swing of things," Goss said, noting that he trains at Win Performance in Highland Park. "Going there initially and working out with Division I athletes through all levels, that was hard."

In addition to getting back in shape, modifying his diet and gaining weight, he also had to adjust to playing at a different level.

"It was definitely a huge jump that I was expecting and I thought I was ready for," Goss said. "After the first game, I kind of got a little wide-eyed and knew if I wanted to make a difference on the team, I had to hunker down and lock in and know everything and do everything perfectly."

As the season progressed, he said he felt more comfortable on the field. A teammate's injury gave him the opportunity to move from second string free safety to strong safety, where he excelled.

The two-week wait between the end of the regular season and the championship game was nerve-wracking, he admitted.

"I'd never played in a big game like this before, so that kind of got my mind all spiraled up," he said.

But two weeks of practice and watching game film gave him and the team a confidence boost, and they were able to pull out the win.

"It's surreal because I would say 95 percent of football players put as much as they can into this game and almost all the time, they never get rewarded for it," Goss said. "Being able to put in as much as we did in this whole season and come out champions is really a special feeling."

Goss said the team's coaches did a phenomenal job.

"They're not coaching at a big time Ohio State or Michigan, but they would put more effort in than I would say those guys do," he said.

He plans to play for COD again next year and said his focus is on working hard for the program and contributing what he can. What will happen after that? Goss plans to wait and see.

"If God wills it and I get blessed enough to go play someplace else, I'd love to," he said.

In the IHSA state semifinal game against Sycamore High School, after Hinsdale's Zach Hayes scored the final touchdown for Nazareth Academy, he watched a teammate grab an interception to secure the win.

A week later, he was the one with the interception that secured a 45-44 victory for the Roadrunners against Peoria Nov. 26 at the IHSA 5A championship game.

"That was still the best feeling I've had in my sports career and maybe one of the best in my life," said the senior, who started playing for the Hinsdale Falcons in third grade. "To be on the stage of an actual state championship and be the one to make the play to win the game, it was an amazing feeling. I'll never forget it."

It's not a feeling he expected to have mid-season, when the team found itself with a 2-4 record. Three consecutive wins against Leo Catholic, Montini and Benet gave the team a 5-4 record and a playoff berth.

"We had a ton of momentum and we felt it," Hayes said. "We as a team felt the whole tide was changing, and now that we made the playoffs, we weren't 5-4, we were just 0-0 like every other team in the playoffs. We believed in ourselves."

The Roadrunners beat Glenbard South, Boylan Catholic and Morgan Park before facing Sycamore in the semifinals.

"That was the toughest game I've ever played in," Hayes said. "They were a very hard-nosed, physical team."

The Roadrunners were down 7-3 on the last drive and needed to travel the length of the field to score.

"We did and with a minute left I caught a touchdown to put us up by 3 and they had 40 seconds to try to tie up the game," Hayes said.

That's when his teammate caught the interception.

In the championship game against Peoria in Champaign, the Roadrunners had an early 21-7 lead. Peoria scored twice to gain the lead and then the teams traded touchdowns into the fourth quarter.

"Everyone thought it would come down to who had the ball last. We made a defensive stop to win it," he said.

The team had plenty of time to celebrate on the bus ride home, with lots of laughter, music and dancing.

"We were soaking it in for 2, 2 1/2 hours, but no one was complaining how long the bus ride was. It was a joyous moment. Everyone was happy, everyone was smiling," Hayes said.

Parents and fans greeted the bus when it returned to Nazareth in LaGrange Park, and the entire school celebrated the win at a Monday morning pep rally.

"We felt like the kings of the school walking in with our jerseys on," he said.

Hayes said the team's ability to stay positive throughout the season, especially when they had a losing record, led to the state title. 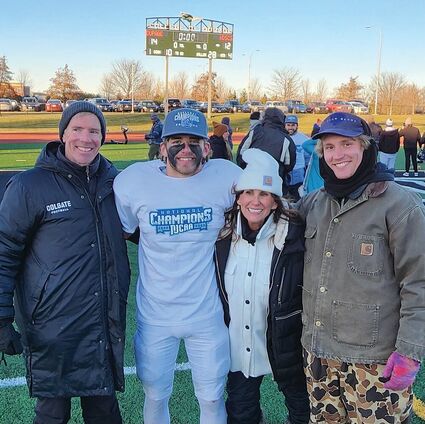 Team members faced a lot of personal challenges this season as well, which deepened the bonds of brotherhood.

Hayes is still deciding what his future will hold. He must choose between attending his dream school, Ohio State, or playing the game he loves at Drake University.

In the meantime, the defensive back, wide receiver and kicker will enjoy his accomplishments. And some well-deserved rest.

"It's a kid's dream to play football," he said. "The fact that I get to play all three phases of the game, I'm just grateful for it."