Save room for Stollen this season 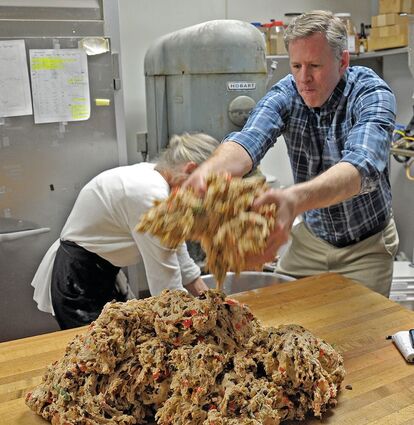 Once the Stollen dough is thoroughly prepared with the rum-soaked raisins, candied fruit and nuts mixed in, it must be formed into smaller portions, which are then flattened and folded to be put into the proofer oven. (photos for The Hinsdalean by Jon Langham)

December is the month for baking. Cookies, pies and other assorted treats are mixed liberally into the season, serving up tasty comfort in the midst of winter's tightening grip.

Into this season of oven-rendered treats, Toni Patisserie and Café serves up a lesser known delight: Stollen. The traditional German holiday bread took a few years to catch on, said proprietor Toni Cox, who opened her shop in 1994.

"We probably started out the first couple years making about 100 loaves," she said. "Now we're up to over 500 loaves a year."

The fruit and nut bread is almost brioche-like, far from the more dense - and gastronomically polarizing - fruitcake.

"Once you get a bite in somebody's mouth, they'll definitely see the differences," Cox said of the

Cox welcomed me into her kitchen to take me through the steps for making a batch that will yield more than four dozen loaves.

To expedite my lesson, she has already combined 16 ounces of yeast, 12 cups of warmed milk and nine pounds of bread flour to make the sponge.

"Mix it up and let it sit for a little over an hour so it doubles in size," she said.

Two bowls sit nearby, one holding red candied cherries, pineapple and a little candied orange, and the other filled with both regular and golden raisins that had soaked in a blend of rum and apple juice - but only for a few hours lest they start to break apart.

"The golden raisins give the bread some color, along with the candied fruit," Cox said, noting another difference from fruitcake. "There's no citron, which I think is the fruit that a lot of people don't like."

"NO CITRON!" reads the splattered, worn recipe sheet, to drive the point home.

In a separate mixer we put in more than six pounds of butter, close to four pounds of sugar and one and a half pounds of almond paste.

"I cream it so it's nice and fluffy," Cox said.

A pound and a half of eggs is slowly added.

"The butter and the eggs is what makes it a brioche kind of bread," she related.

Cox was trained by the best. In the early 1990s, she took a course with former White House pastry chef Albert Kumin from Austria and learned how proper Stollen is prepared.

Once the sponge has come together the butter mixture goes in. I help scoop the creamy mixture into the starter and watch the dough hook go to work. Cox uses a bowl scraper - a flat piece of plastic curved on one side - to make sure nothing is left behind in the transfer.

"This is a tool that is very in demand in our kitchen," Cox said with a smile. "Sometimes sales people will bring a bowl scraper, and it always makes us very happy."

Another 12 pounds of flour then goes in. Mix. Then eight more pounds.

"There are three times that flour is added to this recipe," Cox said. "The biggest thing with making this is just the patience with letting it mix. Each stage it has to mix until it forms a ball.

"Can you imagine having to do this by hand?" she remarked as the mixer's hook beats the ingredients into unity.

Perhaps the most unsung component, salt,

"Salt is my most important ingredient in bread," Cox said, both for flavor and to keep the bread from over-rising. 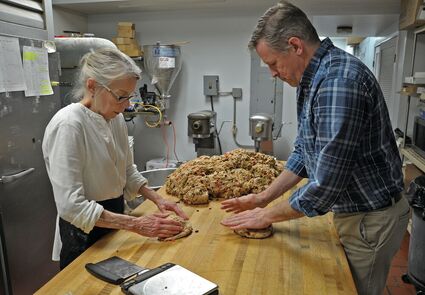 Soon the mixture is congealing, peeling away from the sides to show its tight bond. Now it's time to add the soaked raisins and candied fruit along with sliced almonds and chopped walnuts.

"The rum and apple juice is going to add some liquid to it, which is going to help the dough come together," she said.

We stop the mixer and lift out the dough, tearing off portions of the heavy whole and piling it on the table. From the mass we rip off gobs roughly a pound a half in weight for each loaf. Those got in the proofer oven for a couple hours to rise, then in the oven for an hour at 375. Double sheet pans keep the bottoms from cooking too quickly. Then each is coated in cinnamon sugar for optimal yumminess.

"It's quite delicious toasted with butter on it in the morning," Cox said.

So it is, each bite stirring me to wish all a Frohe Weihnachten!