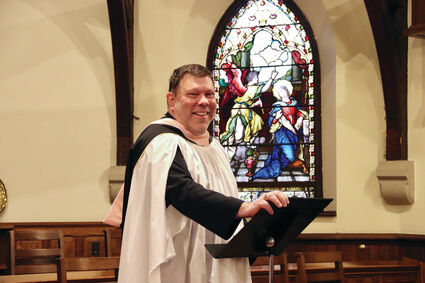 Andrew Fredel has loved sitting behind the keyboard since he took his first piano lessons from his grandmother more than 40 years ago. But leading the music at Grace Episcopal Church isn't something he can do alone. Fredel said he relies on the church choir, instrumentalists and singers in the congregation to bring the music to life. (Jim Slonoff photo)

How does music enhance worship this time of year?

As minister of music at Grace Episcopal Church, Andrew Fredel's primary job isn't to make music, but to encourage music making from others.

"It's very important that the congregation sings," Fredel said, and that's never more true than during the celebration of Christmas.

Christmas draws a collection of those who frequent church, as well as those who come only for the holidays. Fredel said he's careful to include music that makes everyone feel welcome while also offering something fresh.

Church music needs to be approachable and accessible, Fredel said. If not familiar, it needs to be easily learned, with clear, repeated phrases.

When planning music for the church's Advent and Christmas services, a process that begins months before the first snowflakes fall, Fredel said he is careful to switch things up just enough to keep things interesting. Some songs are kept on a sort of rotation, reappearing every few years. But others, including "Silent Night," are musts, Fredel said.

"It's beyond classic," said Fredel, and is something that many people look forward to hearing and singing each year.

"We do sing it by candlelight," which Fredel said adds to the beauty and intimacy of the song.

Candlelight also is used to set the mood for the church's annual Lessons and Carols event. The long-held tradition took place Dec. 11 this year and included songs and readings to help those in attendance prepare themselves spiritually for the Christmas holiday.

"We kind of settle down. Some might call it magical," Fredel said.

No matter the time of year, Fredel said the best part of his job happens when the people inside the church participate.

"There's still nothing more meaningful to me than playing the instrument while accompanying the congregation, singing," said Fredel. At age 52, he's been leading singers from behind the organ for almost 40 years.

"The sound of the organ really caught my ear. It was like a bug that bit me," said Fredel, who started playing organ at age 11 and began playing at church just two years later.

Fredel took his first lessons from his grandmother and went on to earn a degree from Oberlin Conservatory in Ohio, followed by a master's degree from Valparaiso. He brought his talents to Grace Episcopal in 2016, taking the place of Mark Reynertson, who led music at the church for more than 40 years.

Three Christmas services will be offered at Grace Episcopal Church this year. The 4 p.m. Christmas Eve service will feature a telling of the nativity story by children from the church and familiar carols.

"It's probably our best attended service of the year," he said.

The 10 p.m. Christmas Eve service features the choir, a harpist and plenty of opportunities to engage in the music of the holiday.

The final celebration is held at 10 a.m. Christmas Day. Fredel said it's a quiet service with traditional music.

After months of preparation and stressful weeks leading up to the holiday, Fredel said he feels nothing but calm and gratitude once the service begins and the first notes are played. It's his hope that everyone in the church feels that way, too.