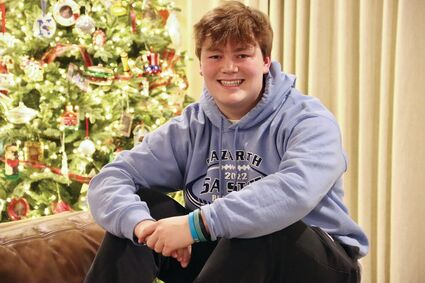 "He said, 'I want to give you Friday off to experience what it's like not having football on Friday, because it's going to be gone soon for you seniors,' " Linn said. "From that point we were playing to just stay together, and that kept us going."

The team kept going all the way to the 5A IHSA state championship game Nov. 26, in which the Roadrunners prevailed in dramatic fashion 45-44 over Peoria.

"To end it that way was the best feeling in the world," he said, acknowledging the bittersweet sound of the final whistle. "It was also very emotional to know it was my last moments of high school football winding down."

It was a storybook ending to a chapter that seemed unlikely for Linn when he entered Nazareth. He grew up playing baseball, including with the Red Dogs/Devils travel baseball programs.

He thought of going out for the Nazareth golf team as a freshman before deciding to give the gridiron a go.

"That was the best decision I even made," Linn remarked. "I'm super happy I chose football because of all the friendships and bonds I made, it's a true brotherhood."

In his first game he was assigned to play cornerback. It didn't go so well for him or the rest of the first-year Roadrunners.

"We got beat so badly that game, 50-something to nothing. I had no idea what I was doing," he admitted.

Fast-forward a few years and those same players are celebrating being best in class.

"I could never have imagined winning a state championship," Linn remarked.

His personal highlight during the final campaign came in the game against Montini Catholic when on special teams kickoff coverage.

"I was coming backside and the (Montini kick returner) started breaking away, and I made a touchdown-saving tackle, which was a big moment," Linn recounted.

Off the field, he's involved with the Mend A Heart Foundation for children born with congenital heart disease.

"One of my teammate's brothers has congenital heart disease, so it's a big thing for him," Linn commented.

Linn goes by a few nicknames, the most unique of which is the moniker he received freshman year at Nazareth Academy: String Cheese.

"After some locker room shenanigans, there happened to be string cheese in my cleat. That's how I got the name," he revealed.

"We've got the whole charcuterie board," Linn quipped.

He encouraged next year's freshmen to not be bashful.

"Be open to new experiences," he said. "Don't be afraid to ask for help if you need it."

The holidays are a special season. "The family gets together and has a White Elephant party, play a lot of cards, listen to a lot of music. It's a great time," Linn said.

"All I really want to do is just spend time with family and friends, have some time off," he said.