Village shops are full of showstoppers 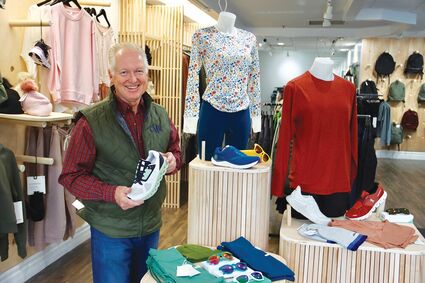 Craig Milkint's pace quickened when he saw this Cloud Stratus running shoe from On at Hinsdale's Peak Lifestyle shop, knowing the stylish pair would give son Alec's girlfriend Josie extra motivation during her workouts. Milkint stepped around town last week's as shopper for the gift guide series. (Jim Slonoff photos)

Craig Milkint is likely a familiar face to many in Hinsdale as a mainstay of The Community Revue shows that grace The Community House stage every other spring. Poking a little fun at the place Milkint loves to entertain audiences is rewarding, as is serving on the village's board of fire and police commissioners to ensure the hiring and promotion of top police officers and firefighters to protect residents' safety.

The Evergreen Park native, who works as the major gifts officer at Culver Academies in Indiana, relishes the trappings of the holiday season. That includes a particularly Yuletide pursuit.

"A long time ago my son and I started a collection of nutcrackers. When we see them we buy them," he said.

The night before Christmas and all through the Milkint house, a pleasant aroma is customarily wafting.

"We usually have a French dinner on Christmas Eve," the father of two related. "I make up some French onion soup, beef burgundy and quiche. And we end it with a bûche de Noël."

Milkint gathered a veritable feast of gift ideas on his shopping trip through town for this third installment in our four-part annual gift guide series featuring appointed and elected officials in town.

• Craig's son Alec will never be late while on the road with a vintage Longines travel clock that's been keeping time since the 1930s. Hinsdale Watch Shop, $650

• A grandmother can never have enough picture frames to display photos of her grandchildren, and a black magnetic AVF 8x10 frame would be a handsome addition to Grandma Mary Resce's collection. Marcus, $385

• Son Alec's girlfriend will have no trouble staying active in a pair of white & black On Cloud Stratus running shoes. Peak Lifestyle, $169

• Among the works by masters, Milkint's eye is drawn to Salvador Dali's "Visions of Chicago" series, particularly the piece featuring Buckingham Fountain, for his Hinsdale friends Kathy and Jim Harris. "That's very iconic," he said. Expressions of Fine Art, $10,800

• Getting to know Hinsdale Police Chief Brian King and Fire Chief John Giannelli through his commission work leads him to sense they'll each appreciate a gift basket with a 12-ounce bag of coffee and commuter mug. Café LaFortuna, $30

• Neighbors Brenda and Wayne Sheldon will love a vintage Nativity set to help put the spirit in the season. The Courtyard, $135 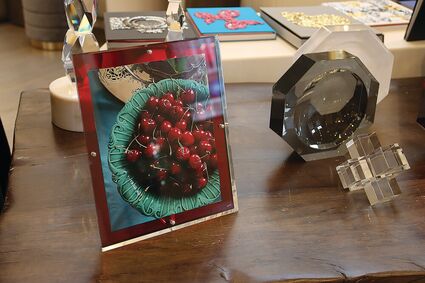 The Milkints' Grandma Mary Resce could feature a rotating exhibit of her loved ones' photos in this black AVF 8x10 magnetic picture frame, which can stand in either portrait or landscape orientation and is easy to change out.

• Michigan friends Eileen and Bill Davidson will raise the festive level as holiday hosts with a set of four crystal embellished wine glasses featuring a reindeer, sleigh and candy cane. Marabella, $26 each

• Craig's daughter Monica and her boyfriend, Austin, will appreciate new winter wear - an Alp N Rock vintage wool sweater for her and a black Parajumper apres ski jacket for him - as they gear up for a ski trip. "They're going to be going off to Steamboat." King Keyser, $298 for sweater, $395 for jacket

• Wife Margaret will be dazzled when she sets her eyes on an 18-karat yellow gold Jade Trau chain with a 2.57-carat, three-diamond pendant in pear, marquis and round shapes. Browning & Son, $5,000