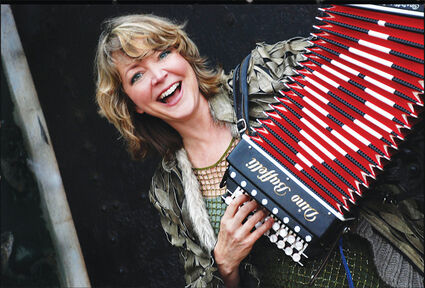 Jennifer Cutting and her OCEAN Celtic Quartet will play their brand of folk music at the Unitarian Church of Hinsdale Dec. 17. "This is actually the high point of our year," Cutting said, with a strong focus on the winter solstice. "It is the return of the light and our relationship with the sun." (photo courtesy of Irene Young)

What do you enjoy about performing this season?

Folk musician and composer Jennifer Cutting was searching for songs that expressed the essence of the winter solstice, but found the landscape rather barren.

So she crafted her own.

"I like the idea of contributing new holiday carols for people to sing in contemporary society." Cutting said. "I've tried to dig down into the heart of why we celebrate this time of year."

She and her OCEAN Celtic Quartet hope many celebrate with them at their concert Dec. 17 at the Unitarian Church of Hinsdale, part of the Acoustic Renaissance Series (see Page XX for details).

The music is intended for all traditions, faith-based or otherwise.

"We're all living under the same sun, so it's something we call get behind," she said.

The Maryland-based Cutting comes from a family of musicians. When her mother's guitar lessons didn't take, she discovered a love for the keyboard and accordion. Cutting began performing professionally in the mid-1980s with her former band the New St. George, drawing influence from folk rock greats like Steeleye Span, Fairpoint Convention and Battlefield Band.

"I was maybe the only female band leader running an electric folk band in the U.S.," Cutting said of those years.

Her OCEAN Orchestra today continues that legacy, but the quartet coming to Hinsdale will be unplugged.

"I love the intimate sound of the quartet. It's just warm and comforting," she said.

And Cutting is especially excited to return to Hinsdale several years after last playing here.

"It was just one of the highlights of our performing career," she recounted. "People packed the house and were very warm and encouraging. That's why we wanted to come back to Hinsdale. People that came to our concert just seemed to get us."

The show will be the group's fourth stop on a five-day tour taking them through four states.

"I like it because we can get into a groove, The concert is just going to get better and better as we go," Cutting said.

Younger audience members will get a kick out of seeing Father Christmas as he recites Mummers' plays.

"He speaks in rhyme, and he cuts a fabulous figure," she said.

The concert, which will be broadcast by WFMT radio, will also include a reading by retiring longtime station host Rich Warren of his poem about the solstice.

"This is a celebration of his achievements for his many decades as a radio host," Cutting said.

She characterized the winter solstice as a "turning point, a kind of magical gateway through which we pass into the new year" and invoked the image of a blazing yule fire "burning away last year's troubles to start the new year unfettered by all that baggage."

Cutting hopes the concert conveys the value of both self-reflection and community.

"Even though the darkness brings gifts of solitude, we need to balance that with times of togetherness," she said. "We all need one another during this time." - by Ken Knutson