Winter Red Devils are heating up 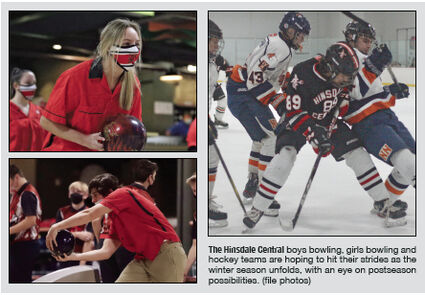 While the daylight may be in short supply these days, there's plenty of illumination inside as Hinsdale Central winter sports move into the spotlight. The Hinsdalean kicks off its three-part preview series looking at each of the season's eight teams with boys and girls bowling and hockey. The second and third installments will follow on Dec. 1 and 8.

Team strengths: We have 16 total members, 15 of whom are seniors. All are super nice kids. Very smart and great role models for younger students and bowlers. I'm certain that if we had younger bowlers these guys would have done all they could to pass their bowling knowledge on down to any new bowlers.

Areas for growth: Of those 15 seniors, 10 have never been on the team before. So, we are older but lack experience. While I am excited to see new kids join the program, I am not quite sure why we cannot seem to attract younger students. I would love to see some more underclassmen in the program.

Who to watch: My bowlers to watch this year are all of the returning seniors: Devan Mehta, Adam Shaik, Aryan Patel, Brian Williams and Jacob Lue.

Season outlook: My hope is that we can start to adjust and become more competitive. We have fairly tough schedule, so any wins are going to be a battle for us. Hopefully by regionals we can be a team that will compete for a spot at sectionals, or, at the very least it would be nice to see a few guys advance.

Team strengths: We've got two girls that are coming back who were a major part of our team last year. So we have some veteran leadership. It's going to be a nice group of kids to work with,

Areas of growth: The biggest thing we have to improve on is consistently making makable spares - like the 4 and 7 or 6 and 10 pins. We have to make those if we want to score. Every one of those is a minimum of 10 pins difference in a score. If we can improve by two makable spares, that turn a 159 into 180 or better. We don't talk about strikes, we talk about spares. It's confidence, it's timing, it's repetition, Bowling is a game of adjusting, and the girls should be able to self-correct as the season goes on.

Who to watch: Senior Avery Anderson returns after being a sectional qualifier last year. Junior April Wu just missed qualifying. Returning seniors Angelina Molfese and Sara Vladisavljevich. We have a couple of younger girls, juniors Adele Groom and Xixi Liu, who are going to figure out where they fit in.

Season outlook: We've got York and Downers and Willowbrook in our conference, all three of which made the state final last year. We'll probably be middle of the pack, but I do think that we do have two girls that could make it into the sectional. We want to compete and we want to improve. Mentally you're competing against yourself.

Team strengths: We have a lot of seniors who put a lot of time into the Red Devil program. They come with the experience playing high school hockey, and I think this season we're seeing the results of their labor. We have a different variety of scorers, and we're pretty well balanced with our scoring. We have different combinations that score at different times, and we kind need that for our success. A lot of them have a familiarity from my coaching with Chicago Hawks Hockey Club.

Areas for growth: We need to be a little bit stronger in our own zone and stronger with the puck and harder to play against. That's what we're looking to do here at Hinsdale.

Who to watch: Senior Zach Devine had 10 goals in two games last week. He has a knack for scoring that most kids don't, and he really works hard at his craft. Senior Alexander Hadesman is a little more of that brute force scorer. Seniors Sebastian Dufort and Anthony Martirano are key players, and senior Peter Cook's got silky smooth hands. Sophomore defensemen Jack Crabb and Will Romberger are a little bit younger, but they play hard and they're committed to the program.

Outlook: We have high expectations. I think next year we're graduating one defenseman, one goalie and 10 forwards, The time is now for us to win and we're here to win the championship this year. We know that we're going to get every team's best of every time. People are coming out to watch us play, and it builds a sense of magnitude for the games, and the kids really feed off of that. We're not just making better players, but through the leadership of hockey director Jim Swoyer and all our coaches, we're making better men and better human beings.