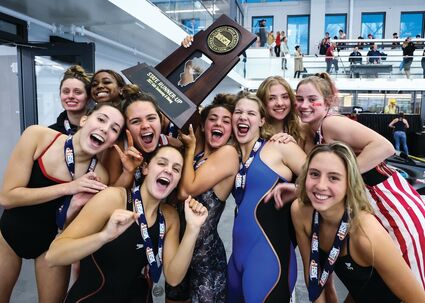 "This is the best state meet we've been a part of - and we've been a part of some really good ones," said varsity head coach Bob Barber, who has led the team to three runner-up finishes. "I didn't think last year's school records were beatable and we took down five more (see sidebar)."

Kit Schneider defended her title in the 50-yard freestyle with

"I couldn't imagine a better ending for the whole team," she said. "It was an amazing meet for all of us. I felt we all swam out of our minds. My teammate Carrie Kramer also won her event (100-yard breaststroke). I think the combination made everyone so happy and we had so much fun."

"I think that's been her goal since the minute she got fifth," Barber said. "Her internal motivation pushed her to be at just about every practice she could get to for the past year and, beyond that, her mental strength, she knew that was something she wanted to accomplish and knew she could do it."

Kramer was thrilled with the win.

"I mean, that's pretty much what you dream of as a high school swimmer all four years," she said. "It was awesome."

She acknowledged training was not easy.

"It takes a lot of hard work. Even in swimming sometimes, dropping .5 (seconds) at our age is hard," she said.

"That was an athlete choice," Barber said of the assignment. "She enjoys and has some fun on the relays and knew they would carry us to a high-end performance."

Schneider said she particularly enjoyed the 200 medley relay, which she swam with Kramer, Burley Bokos and Phoebe Paarlberg.

"All those girls are some of my best friends," she said. "Those three in particular I had trained with the entire season pretty much, so it was fun to put it all together into one relay."

The relay came in second but broke the school record by a full second, Barber said, with half of its members novices to state-level competition.

"Two of the girls on there (Bokos and Kelechi Ojiako) had never swam at state before on a relay," he said. "(Ojiako) ended her season last year at JV conference."

"Both of her individual swims were not only taxing, but they are very emotional for the team," Barber said. "When you do well, we do better in that kind of situation. She definitely took off and excelled in everything she did last weekend."

Bokos said she wasn't expecting to swim the 400-yard freestyle relay Saturday but was happy to help her team.

"I did really good in my 5 and my coaches were like, 'OK, we're going to put you on the relay. Do you think you can anchor this thing?' We ended up with fifth, which was super good. It was a really fun relay to end the meet." 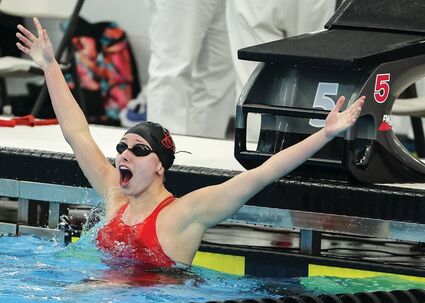 Kit Schneider celebrates her victory in the 50-yard freestyle.

Senior Olivia Suliga led off both free relays and finished 21st in the 50-yard freestyle, scoring for the first time at state and providing "essential depth" to the team's speed in the relays, Barber said.

Martell, who came in ninth in diving, got the team off to a solid start, Barber said.

"Her four points in diving kept us in second place and just gave us energy walking in the door," he said. "Any time you can have a diver make the top 12 and lock in points before you even start the swim portion of the meet, you gain a lot of confidence."

Barber said he was happy for the seniors' strong finish to their high school careers. Bokos said she's already looking forward to next year.

"I'm excited to be a senior next year and kind of control the swimmers and push them as hard as the seniors did for me," she said.

Four seniors on the Hinsdale Central girls swim team made it to the state finals. They shared their most memorable moments of the meet.

“I really liked, after my 100 breast, when I’m finally done, I get to watch the 4 free relay and I just love watching all my friends do well. Watching the 4 free relay at a high school state meet is so fun because it gets so loud and everyone is supporting each other.” — Carrie Kramer, who will swim at the University of Arizona next year

“After the 400 free relay, I just remember getting out of the water and just starting to cry because it was all over and it all felt so surreal in that moment. Even during the race, I was like, ‘This is the last one of my entire high school career.’ It was so sad but it was so wholesome and it was such a full-circle thing.” — Kit Schneider, who will swim at the University of Wisconsin-Madison next year

“When Kit won the 50 free and Carrie also won the 100 breast. I was at the end of Kit’s lane and when she won, everybody goes wild. She’s in awe — she’s looking at the board. It was crazy. It was amazing. She’s state champion two years in a row. Carrie getting state champ for her first time and beating some people she really wanted to beat from New Trier was an amazing time for her and everyone was super proud. It made our coach cry, which was awesome.” — Phoebe Paarlberg, who plans to swim in college next year