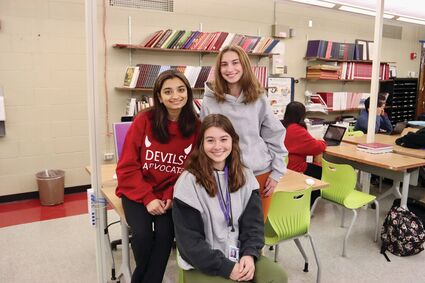 As editors-in-chief, seniors Simrah Qasim, Lily Ging and Taylor Levin lead brainstorming sessions to come up with story ideas, work with fellow students to improve their stories and generally see the Devils' Advocate publication and website through from story conception to completion. (Jim Slonoff photo)

Ideas for a news story can come from just about anywhere, including the walls of Hinsdale Central High School.

For Taylor Levin, editor-in-chief of the Devils' Advocate student magazine, fliers and posters are no longer just announcements or decorations on a wall. Each announcement of a club meeting, school dance or after-school event is a potential article for the monthly publication.

Levin, a member of Cherise Lopez's journalism II honors class, is one of nine students on the staff. Another nine juniors and seniors make up the staff of the Devils' Advocate website. Lopez said all students in the class can opt to be on the staff of either the Devils' Advocate or yearbook. Many who take the class as juniors choose to repeat the class as seniors, in order to continue work on their publication of choice.

While members of the staff concentrate their efforts on feature writing, contributors write less often and generally focus on news and sports.

Club member Finley Bisch said she enjoys writing about sports for the Devils' Advocate website and taking pictures to accompany her stories.

"I love interviewing athletes," said Bisch, who is an athlete herself and hopes to study sports journalism in college. But first, the junior plans to spend her senior year as part of the Devils' Advocate staff. Until then, Bisch said she enjoys being able to write as time allows while also learning about journalism and reporting as a member of the Devils' Advocate Club.

Lopez said students in her journalism class learn the basics of journalism, including the "5 Ws," Associated Press style and how to properly use quotes. But staff members seem to agree that there's a lot more to be learned as a member of the Devils' Advocate.

"It's helped me a lot with my writing skills," said Lily Ging, co-editor-in-chief of the website. She said her work on the student news source has also sharpened her research and time management skills.

"I always knew I wanted to write for the Devils' Advocate," said Ging, whose two older siblings also were staff members. She said she made it her goal as a freshman to become editor-in-chief her senior year. Levin, who decided to join the staff after a student promoted it in one of her English classes, said her work on the Devils' Advocate has taught her a lot about her school, her community, and about the field she hopes to study. Levin is considering a career in broadcast journalism.

Simrah Qasim, co-editor-in-chief of the website, said she's gained confidence through her work as a writer. Speaking to strangers, whether they be fellow students or school leaders, is no longer as intimidating as it once was.

The first printed issue of the year came out in October and included a preview of the Devils' Roast coffee shop expected to open soon, a feature about the school's new band director and a piece exploring drag queen bingo events. Lopez said she was impressed with the students' work and looks forward to the next issue, already well in the works.