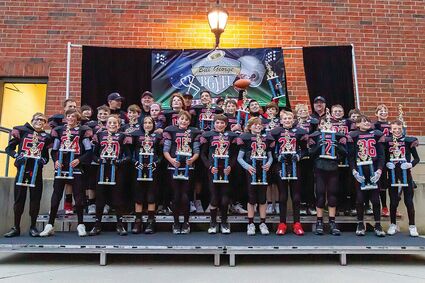 The Hinsdale Falcons shut out the Palatine Panthers 27-0 to win the Bill George Youth Football League Super Bowl for 11U. Jake Wolowick (No. 11) congratulates Knox Apple (No. 16) in the endzone right after he scored the first touchdown of the game to give the team incredible momentum. Alex Schaeffer (No. 9), Will Smith (No. 98), Cal Cull (No. 31) and Henry Harder (No. 27) work together to shut down the Palatine offense. (photos by Erin Hannah for The Hinsdalean)

"Four quarters of football, that's all we've got."

Through a tremendous season, the 11u Silver Falcons had some great games.

Despite unfavorable temperatures, extreme winds and delays, the Falcons came with their signature pregame bark. Amped up, Hinsdale took the field at Illinois Benedictine College to face the Palatine Panthers.

The Falcons started just shy of midfield. The winds and weather failed to halt Hinsdale's offensive game plan. Strong carries from Michael Garber and Jake Knapp got the offense started, moving the ball to Palatine's 45. Quarterback Benjamin Allanson then fooled the entire defense with a play-action pass, hitting Knox Apple, who took the ball 45 yards for the opening score.

Hinsdale's stonewall defense, led by Knapp, Alec Meltzer, Alex Schaeffer, Clayton Tims and Henry Harder came meaner than ever. Palatine mustered 10 rushing yards their first drive. Little did they know that was all they would be given. The Falcon defense put down the hammer, completely destroying Palatine's run game. Unrelenting tackles for loss consistently pushed the Panthers back, resulting in a total of 7 yards allowed in the first half.

The Falcon O-Line of Bryce Kinder, Schaeffer, Leo Rivera, Noah Natarelli, Luke Altemose and Will Smith were serving pancakes for their running backs as Knapp pounded it in for the 1-yard touchdown. Allanson passed to Jake Wolowick for 2 points, giving Hinsdale a 15-0 lead at half.

Entering the third quarter, the Falcons kept up the heat. Continued tackles for losses and two forced fumbles eliminated any hope of Palatine advancing. Offensively, a mix of run and pass kept the Falcons rolling. Knapp and Apple reached the endzone once more each, finalizing a score of 27-0. 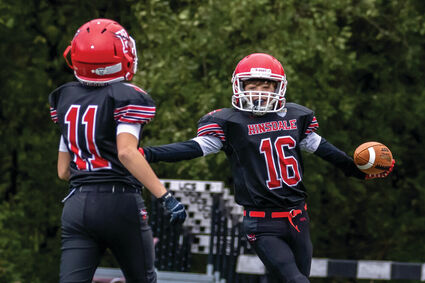 Garber (10 carries, 35 yards, PAT rush) and Knapp (5 tackles, 1 fumble recovery, 64 yards, 2 touchdowns) were work horses on both sides of the ball, containing runs and producing tough carries to keep the chains moving. Allanson (61 yards, 2 TDs, 2-point pass, 43 yards rushing) was a quad threat, passing, running, returning and making tackles at safety. Schaeffer (2 FF, 2 TFL, 1 sack) and Meltzer (2 TFL, 1 sack) caused chaos in Palatine's backfield, leading their fellow defenders in the complete shutdown. In the Falcons' best game of the season, they produced more than 200 yards of offense, scoring in all four quarters, while allowing just two first downs and 27 yards on defense. That's about as perfect as it gets.

When the clock struck 00:00, the Falcons went wild - cheering, hugging, even letting out tears of joy. It was truly an incredible team win, and every player on the field contributed. The players and coaches couldn't be more proud of the effort and performance all season. Each player was remarkably selfless, coachable, determined and team-oriented. They earned everything they achieved, together as a team.