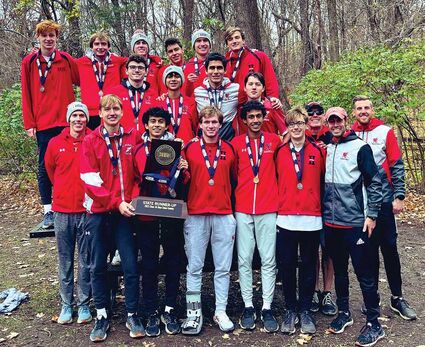 He beat it all right - along with everyone else - to become the first state champion in school history.

Bandukwala immediately found himself the target of celebration.

"Probably seeing all the teammates and family after the race coming up and jumping on me while I could hardly breath, I'm never going to forget that," he said.

Bandukwala's clocked in at 14:46:15, 14 seconds faster than his 2021 performance despite strong winds on a muddy Peoria course that was hosting its sixth race of the day. The conditions resulted in significantly slower year-over-year times for much of the field.

He and senior Dan Watcke, notching his second All-State honor with a third-place finish in 14:56.22, helped the Red Devils register a team score of 89, the lowest in program history. Not low enough, however, as it was edged out by champion Plainfield South's 88. It was Central's best showing since back-to-back titles in 2013 and 2014.

Senior Michael Skora, placing 26th at 15:29.04, said when he first looked at the scoreboard, it had Central in first.

"I was very excited as it's been a goal for several years now. Eventually it updated and we realized we lost by one point," Skora recounted. "But that moment right after the race, standing around with other teammates and coaches just watching the results was pretty memorable."

"When you're that close, the boys think, 'If I just moved up a spot here or there we could have won,' " Westphal said. "I think they'll appreciate the performance more over time."

Fellow senior Jesse Gamboa, 29th at 15:31.65, said the loss was crushing but credited the coaches for helping put it in perspective.

"The coaches told us how proud they were and how we made history scoring the lowest score in Hinsdale Central history," Gamboa said. "Coach Westphal told us seniors that how even though the moment stung, we seniors had to set an example for the rest of the team."

Westphal said he glimpsed a foreshadowing of Bandukwala's emergence at the conference meet.

"He kind of initiated a move during the race, and I remember thinking 'That was a pretty bold move,' " Westphal said. "By taking that chance you kind of saw that it wasn't out of the realm of possibility (for him to win)."

Watcke also improved his standing from 14th place in 2021.

"Aden and Dan have been running great all season," Westphal said.

Westphal said Bandukwala thanked the seniors after the race for equipping him with the knowledge that led to his triumph.

"He was really appreciative," Westphal said. "We're happy for Aden to experience that and just happy for the all the guys."

Take a risk. Race with your heart on fire.

"We write mantras on our arms just as something fun we do and to keep us motivated," she said.

In just her third race of the year due to injury, Catie found the motivation she needed to place 11th overall at 17:53.61 and earn the third All-State honor of her career.

"That's always exciting to do at the state meet," she said.

As a team the Red Devils placed eighth of the 28 teams competing, the program's 13th straight top-10 finish.

"Since 2000, we're the second most successful girls program in the state behind only Naperville North," said head varsity coach, and Catie's father, Mark McCabe.

He credited the team's mental toughness for their strong performance in blustery, sloppy conditions.

"If you step up and run well and go in with a positive attitude, you'll do well because everybody's dealing with the same thing," he said. "Adverse conditions work to our favor. No one's going to go in better prepared mentally and physically than we are."

"She battled through so much adversity this year," he said. "She was running sick on Saturday and didn't really realize it. It was a really impressive effort."

Senior Sarah Fischer, who finished 39th at 18:33.87, expressed disappointment about her performance but said the team surprised many with their results.

"I think I put a little bit more pressure on myself this year," Fischer said. "As a team, given the conditions, we did better than expected."

"It was pretty amazing. We knew going in that nobody was expecting us to be in the top 10," he remarked. 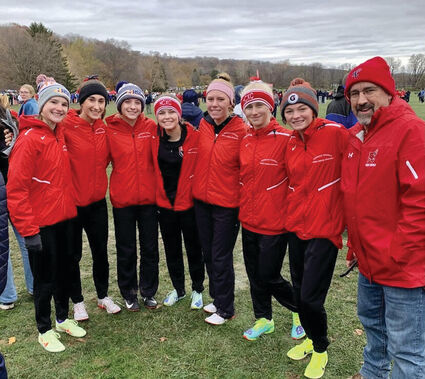 Catie McCabe said this seasons' team was close-knit, and the seniors tried to prepare the underclassmen for the state meet experience.

"This year there were some younger girls in our top seven, so we were focusing on them and giving them some advice and what to do to get ready," she said.

"All seven of the girls handled the conditions and everything surrounding it really well," he said.

Two Hinsdale runners competed for Benet Academy in the IHSA 3A state cross country final on Saturday in Peoria.