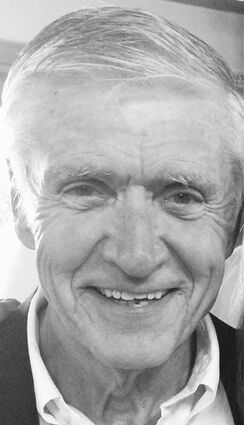 Kenneth John Charles Sive, 84, of Hinsdale, passed away Oct. 31, 2022, surrounded by his wife and children.

He was born in St. Paul, Minn., to Charles and Ann (Schultz) Sive and was one of five siblings. He attended Central Catholic High School in Fort Wayne, Ind., and in his sophomore year, when a transfer student, Sharon Rooney, walked into his class, Ken prophetically said, "That is the woman I am going to marry."

Ken went on to become Student Council president and was a standout offensive and defensive guard on the football team. His leadership skills and tireless work ethic defined him. He attended the University of Notre Dame as an ROTC candidate and earned his bachelor's degree in economics in 1960, paying his way through with many jobs from cutting hair to laying railroad ties.

Ken and Sharon were married Dec. 26, 1959, at the Log Chapel at Notre Dame. After graduating college, Ken served in the Army for two years and then went to work for Hallmark Cards in marketing, sales and personnel, where he spent his entire 39-year career, rising through the ranks to become a senior vice president and retiring in 2001. Along the way he earned his master's degree from Pepperdine University and guest lectured at his beloved Notre Dame. Post retirement, Ken donated his time helping Sister Concetta with ESL students in Palm Desert, Calif., and mentored an inmate for years at the Joliet Correctional Center until his release. Ken loved working out, watching Notre Dame and Purdue football and basketball games, and playing golf and basketball. In fact, even at age 72, he was victorious in a competitive family two-on-two basketball game, continuing to impress with his sharp shooting. Ken also inherited the Sive dancing gene that he shared with his siblings and would often dazzle others at family celebrations.

He was preceded in death by his parents; and his brother, Charles Sive III.

In lieu of flowers, memorials may be made to CurePSP, 1216 Broadway, 2nd Floor, New York, NY 10001 or online at http://www.psp.org/iwanttohelp/ways-to-give/.