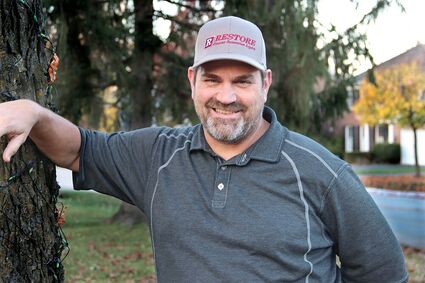 When Chris Black finished high school at age 17, the Carbondale resident said he didn't think twice about what would come next.

"It was natural for me to go on to SIU (Southern Illinois University)," Black said. But it didn't take long for Black to realize that while he wasn't quite ready for academia, he also didn't want to stick around town. That's when he made the decision to "see the world" as a member of the U.S. Marine Corps. Over the next several years Black did see the world, sometimes in ways he said he never imagined.

After completing boot camp in San Diego, Black entered the school of infantry at Camp Lejeune in North Carolina and eventually became a machine gunner and a part of the Marine Corps security forces.

That's when the world travel began. On his first trip out of the country, Black traveled to Sicily, Italy, to begin an 18-month stint. Each day, Black said, he would look out the window of his temporary home to see Mt. Edna, Europe's most active volcano, in the distance.

"A battalion is floating around the Mediterranean at all times," Black said. Known to soldiers as a "Med float,' Black's duties aboard the craft included the recovery of American citizens from the U.S. embassy in Liberia as that country embarked on a civil war.

After not seeing land for 93 days, Black said he set foot ashore just in time to head for the Persian Gulf. Sadam Hussein had invaded Kuwait, and Black was to be part of the U.S. response. He spent Christmas 1990 with his family before leaving for the war on Dec. 26.

A child of the late 1970s and '80s, Black had never known a time when his country was at war. His first experience was as an infantry soldier.

"I saw plenty," Black said. "But it was a fraction of what the guys in Iraq and Afghanistan endured."

Black returned to the U.S. in May 1991, completed his service on June 1, and prepared to resume life where he left off by enrolling in college. That's where he met his wife, Connie.

"We weren't even considering Hinsdale," Black said of his family's decision to move to the village almost 20 years ago. Since then, the village has become home. Oldest son Charlie graduated from Hinsdale Central High School in 2021, daughter Chloe is a sophomore at Central, and Collette is a fifth-grader at Madison School. Connie is a teacher at Monroe, and Black works for a fire and water restoration company.

On Veteran's Day each year, Black said he stops to reflect on his time in the Marine Corps, the role it has played in his life and the many, many men and women who have served the country. He also recognizes November 10 - the birthday of the U.S. Marine Corps.

Black said he's not sure where he would be today if not for his years with the Marines. Despite being difficult at times, he looks back fondly on those days.

"When you stop and look back on it, I wouldn't trade it for a billion dollars," he said.