11U Silver Falcons will vie for title 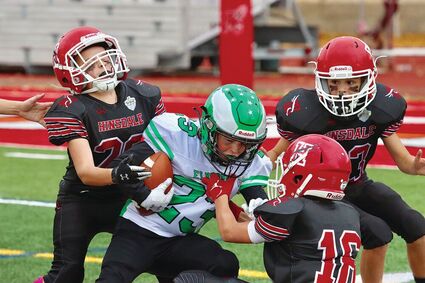 Hinsdale Falcons Clayton Tims (No. 20), Benjamin Allanson (No. 33) and Knox Apple (No. 16) stop an Elmhurst Eagle in the final minutes of Saturday's game to preserve the 14-0 shutout.

Of the six Hinsdale Falcon football teams that made it to the second round of playoffs, only one will head to the Bill George Youth Football League Super Bowl Saturday - the undefeated 11U Silver Team.

Head coach Jake Corcoran said he felt a mix of relief, excitement and pride when the buzzer sounded and the Falcons had defeated the Elmhurst Eagles 14-0 to earn the Super Bowl berth.

"We spent a ton of time preparing and it definitely paid off," he said. "Obviously everyone is excited. I'm a little anxious, too. We want to get that win."

Corcoran said he had no idea at the start of the season that his team would be heading into the championship game undefeated.

"To be able to transform from last year's season being around 3 and 6 to this year and having the season that we had was really unbelievable," he said.

Returning players worked hard in the off-season and the pre-season, he said. Their efforts were complimented by the addition of some new players.

The team has been working this week on a mix of fundamentals and strategy in preparation to face the Palatine Panthers.

"They are definitely a tough football team and their record definitely reflects that," he said." So far we are the only team that has beat them this season."

Corcoran said the assistant coaches - Mike Garber, Steve Smith, Virgil Kinder, Adam Schaeffer and Preston Tims - have made a huge contribution to the team's success. He made special note of line coach Tims' years of playing and coaching the sport.

"His experience and his addition to our team this season has been extremely transformative," Corcoran said. "He knows a lot of very advanced techniques and blocking patterns."

The team's strong defense has led to seven shut-outs in nine games.

"We've really made it tough for the other offenses to move the ball on us and that has been a massive contributing factor into all the victories we've achieved," he said.

Corcoran said the players' dedication has made a real difference to a team that does not rely on one or two players to make things happens.

"We have a lot of very good football players, but we have no superstar studs," he said. "We are a very, very great team. I think it is a culmination of the effort and the teamwork and the camaraderie that the guys have developed this season."

Kickoff is at 2 p.m. Saturday at Illinois Benedictine University in Lisle.

A point or two made the difference for two Hinsdale Falcon teams this weekend, preventing them from advancing to their Super Bowls.

The 9U Silver team lost 12-13 to the Plainfield Junior Cats and the 10U Gold team lost 6-8 to the Tri-City Chargers.

"The kids gave everything they have," said Jason Jones, head coach for 9U Silver. "They were focused and attentive and they left it all on the field like we asked them to."

The score went back and forth throughout the game, with Plainfield scoring first. The Falcons made two trips to the end zone but Plainfield came back in the third quarter with a touchdown and extra point.

"The fourth quarter, we just couldn't answer," Jones said, noting Plainfield was a tough opponent. "They are 9-1, with their only loss to us earlier this year."

Jones couldn't say enough about the boys on the team.

"This group of kids has amazed all the coaches on their willingness to be coached, the effort they gave and the success they had," he said. "We are beyond impressed with them. It was an absolute pleasure to coach these kids."

This is Jones' fourth year coaching Falcons and the first coaching his son.

"I absolutely loved coaching my son this year, being able to share everything with him instead of telling him about it," Jones said. "Driving home from practice together, watching film together. I'm not sure my son enjoyed having me coach him, but he'll have to get used to it.

"The kids received some of the best coaching," he said. "I was honored to share the field with these men."

10U Gold coach Matt Camp also praised his team for fighting hard in the playoffs and improving all season long.

"We should've won the game," he said of the 6-8 loss to the Tri-City Chargers. "We had a few miscues in the first half and weren't able to score."

When the team did score, they couldn't convert the extra point.

The boys were extremely disappointed, he said.

"My message to the boys after the game was you put in 100-percent effort. If you are going to do something in life, you have to put the work in. That's a lesson they can take away from the season." 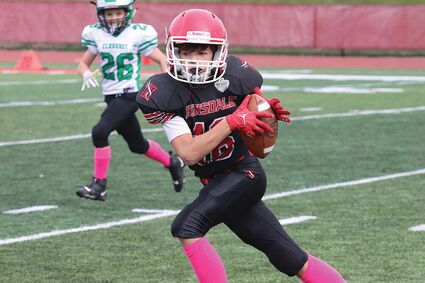 The team was able to bounce back from a three-game losing streak earlier this season.

"We got better every week and we kept tweaking things," Camp said.

He said offensive coordinator Damon Phalen, who played quarterback for four years at Colgate, had the team well equipped with plays.

"We had probably double to three times the number of plays of everybody else," Camp said.

"We had a high number of shut-outs this season and he brought a lot to the team as well," Camp said.

Game summaries of most contests appear on Page 41.