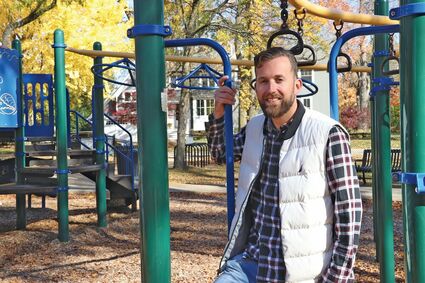 Mike Hayes was 15 when he got his first taste of the rigors of recreation management.

"I oversaw the adult softball leagues ­- turning on the lights, setting up the bases and getting yelled at by all the 16-inch guys as a youngster," Hayes recalled. "It gave me some tough skin."

It also gave him direction toward a potential livelihood.

"It kind of just drew my interest, and I thought, 'Maybe there's a career in this field,' " he said.

"I love it. It's a great town, people are nice, it's beautiful during fall," Hayes said. "We're just trying to get the wheels going. We have a young team that's rebuilding. Now we're fully staffed and ready to roll."

After college Hayes rolled into Tinley Park as the athletic supervisor. One of his first tasks was to organize the community's inaugural Turkey Trot race for several hundred participants.

"It was so rewarding to have that very first event under your belt, knowing that you organized it and planned it from start to finish," he said. "It was just a big morale booster."

Hayes took the valuable skills he acquired to become superintendent of recreation for the Fox Valley Park District.

"I was helping oversee Aurora, Oswego, North Aurora - a big area," Hayes explained. "That helped me gain knowledge in the field."

Taking the same post with the Bensenville Park District made the commute from his LaGrange Park home and young family a little more bearable.

"I always told my boss that I was never going to leave unless it was something closer to home and it was a step up," Hayes related.

The top job with Hinsdale parks and recreation met the criteria.

"Coming here was extremely easy for me. I jumped right into it," he said, noting his particular fondness for KLM's natural beauty and the Hinsdale Community Pool facility.

"It's one of the nicest pools I've seen. I'm looking forward to summertime," he said.

Hayes said he also was eager take his lunch break Monday to see his kids' school Halloween parades for the first time. But the season he most anticipates on a personal level is Christmas for the opportunity to transform his home into a holiday attraction.

"It takes me about a month and half to decorate my house," Hayes explained of the elaborate light display.

Visitors are constant, delighted by the large present that can be walked through and a sidewalk light tunnel.

"It is so fun seeing people stop in front of your house and run through the lights," Hayes said. "My kids sit at the window waving at them.

"I recreate at work and I do the same thing at home," he added.

"You'll see me out at the parks talking with the public and listening to people's thoughts and concerns and trying to make this a better place," he said. "You know all the hard work you put in is building memories, and that's what drew me into this field and keeps me happy."