Undisputed queens of the court 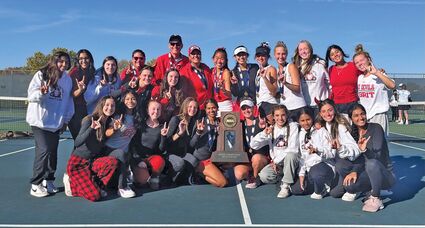 The Devils just wouldn't be denied.

In an IHSA girls tennis state tournament last week that could have resulted in championship honors bestowed elsewhere, Hinsdale Central made the most of key opportunities for its second consecutive title and the 20th in the program's unparalleled record of achievement.

"There were a lot of points for New Trier and us and even Stevenson still on the table," head coach Shawna Zsinko said. "So many things had to happen for it to come together. My girls came out and had a really strong showing."

In warm and breezy conditions at host Buffalo Grove High School and surrounding sites, Central stayed moored to its singular goal of going home with the first-place plaque.

"The match was super tough because we were not ahead by much over New Trier, and I knew that if I lost it would put us in a really stressful situation," Kim said.

She kept battling and soon broke through.

"My opponent was having a tougher time, and I was able to win the next seven games in a row," recounted Kim, who ultimately won in straight sets, 6-4, 6-2, earning 11 overall points for the team and All-State status for herself.

"It was just the biggest wave of relief ever," she said of the victory.

"She got teary, I got teary. It was like being on edge the whole match and then you were able to let that emotion out," Zsinko said.

Meanwhile the doubles team of seniors Nicole Hu and Bridget Novatney had their own third-place showdown, which they closed out in a tense 6-1, 4-6, 6-2 triumph over a top-seeded Deerfield pair to help seal the title with the last of their 11 team points and their own All-State honors.

Novatney said reuniting with their teammates afterwards was sweet.

"We played 'Candy Shop' by 50 Cent on a speaker. We all danced, and it made me realize how much of a family this team is to me," Novatney said. "We never forget to have a little fun. I'll always cherish every single small memory like this one."

For Hu, being rushed on the court underscored the significance of their performance.

"At that point, I knew that we had won state as a team and was so proud of everyone's hard work and contributions to the tournament," Hu said.

Central now has won 40 percent of the state titles awarded in the 50 years of IHSA girls tennis finals. No other program even comes close. The last 16 seasons have been especially fruitful, yielding 12 championships, 3 runner-up trophies and one third-place finish.

Zsinko said the girls felt the burden of living up to that legacy.

"Every year you're trying to do as well as you did the year before," she said. "I think the girls were feeling it. They were nervous. We had to take one match at a time and focus on what we could control."

The other doubles team of senior Shannon Stover and sophomore Abigail Gambla, after losing their third-round match, proceeded to win their next four consolation matches for crucial contributions to the team total.

Stover said the duo had to dig especially deep in grueling match against New Trier after finding themselves down 9-10 in a decisive tiebreak.

"Each point lasted for at least 15 shots," she related. "It was the best feeling to win the next three points in the tiebreak and secure the win. I can't help but believe that the match we won by only two points played a big part in the team's overall win."

Their sixth-place finish and eight team points was also All-State-worthy.

"I'm just so glad that we could end our Hinsdale Central tennis career with a pretty nerve-racking, yet rewarding, state tournament," Stover added.

Senior singles player Prachi Shah said she was worn out after winning her second-round consolation match - her third match of the opening day - in a tiebreak. Her reward? A fourth match in 20 minutes.

"After losing the first set 1-6, I was ready to give up given how fatigued I was," Shah related.

"I knew I had to keep on fighting to help my team. I started winning in the second set and every time I looked over at my team and my coach, I felt a boost of energy and determination," she said.

"She had like a two-and-half hour match, and then she had to play three more (consolation draw) matches that day," Zsinko said. "There were just so many moments where (the girls) just fought. I was really proud of everyone because all you needed was one momentum shift and the outcome could have been different."

One of those moments came on Friday when a New Trier loss meant the Devils would go into Saturday with a morale-lifting two-point lead.

"That helped the girls just settle down a little bit and not feel as much pressure," Zsinko said of the favorable development.

Unlike some state titles that were won rather comfortably, Kim said Central showed its mettle this year.

"I'm just really proud of myself and my teammates to be able to pull together. That was the best way to win the title, it was so much fun," she said. 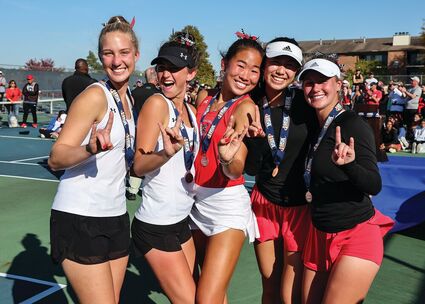 Having five seniors on the state team representing Central for the last year imbued the experience with greater meaning.

"I'm personally really pleased with how it ended and that I was able to contribute to bringing home the state title our senior year," Kim said. "Central has such a rich history and there's nothing more we wanted than to bring that trophy home."

Several players expressed gratitude for the non-state roster teammates, family and friends who turned out. Zsinko said their support was instrumental.

"We really had a good representation of fans and parents. It was just really awesome," said Zsinko, who's only regret was not filming their storming of the court after the Novatney/Hu win.

It was Zsinko's third title as head coach, and one she will remember for a long time.

"I was really emotional because it was so much sweeter than if we had sealed it early on," she said. "Holding that trophy when you didn't think you were going to was just amazing."