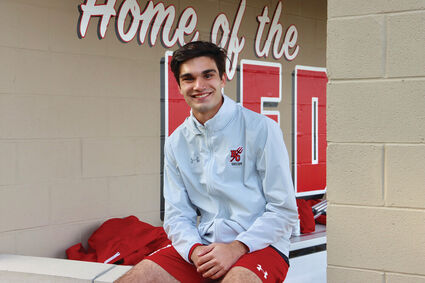 When did you first start playing soccer?

My first time ever playing soccer I was like 3 or 4 during AYSO. I started club soccer probably when I was 10.

The great people. I've been playing with the same group of people for a while. It's always nice to get out of the house and play soccer with a great group of people. It's just fun. It's a sport I've been watching and playing forever. I've come to enjoy playing just for the sake of playing.

What is the most challenging part of playing left back?

It's a lot of running. I'd say it's probably, in terms of endurance, one of the most demanding positions because you have to work the flank, the outside. Also just knowing where to be and when to be there. It's physically demanding and mentally demanding as well.

Technically I've improved a lot in terms of technique, my first touch with the ball and my control of the ball in general. Mentally I've become a smarter player since my freshman year.

Do you have any pre-game rituals or routines?

I like to take naps before away games. It helps to clear my head. It helps with the mental aspect because it's tiring to travel.

What is your goal for the post-season?

I play piano. I've been playing piano for 14 years. I play a lot of romantics because I have to do that for competitions. Ragtime is pretty fun, too.

I will be attending college (hopefully Georgetown). I probably will be playing soccer at some club or intramural level.

Why does coach Mike Wiggins like having Theotikos on the team?

Greg sets the example everyday in the way he shows up, takes in the information, applies it while working hard at being the best he can be at his position. It's fun for us as his coaches to see that he just enjoys playing the game.