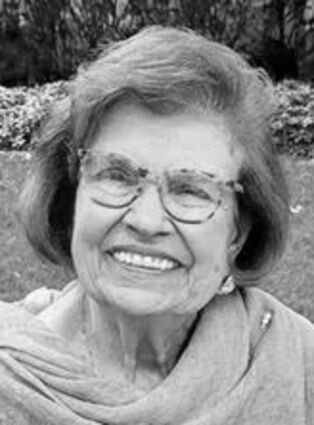 She was married to Peter "Quinn" Waterloo for 65 years and often said the best thing she ever did was to have eight children.

Shirley was a perpetual optimist, affirmed and esteemed by Quinn. She maintained a positive attitude, seeking the good in people and appreciating even the simple things in life. Shirley's culinary skill was legendary. She said herself she never saw a recipe she didn't read. A featured cooking columnist in The Doings, she also gave cooking lessons from her home. As a young mother, her daughter Nora asked Shirley for help navigating the dinner hour. This inspired the 1988 edition of "Shirley's Kitchen Aid, A Month of Family Favorites and Company Fare." Shirley was responsible for the "cook" part, Nora for the "book" part.

Shirley shared with Quinn a love of hosting meals as a way to bring all sorts of different people together. Their tour de force: Shirley's Christmas Eves, serving 50 guests sumptuous holiday fare created at home in her kitchen.

Born in 1930 in Chicago to Marie and Joe Jacobs, she attended St. Aloysius Catholic School and the Josephinum Academy. She studied two years at Mundelein College, paying her own way working summers in a secretarial post. Once her youngest child reached junior high, Shirley returned to the work force. She employed her love of beauty as a retail clerk for Lord & Taylor, then founded a venture, Art Consultants Inc., matching local artists with corporate art collections. She retired from Morgan Stanley Wealth Management where in a late-life career she partnered with her husband as a financial advisor.

An active volunteer, Shirley tutored English to recent immigrants, admitted patients to Cook County Hospital and served as a docent at the Art Institute of Chicago. Shirley cultivated friendships with the abundant energy that defined her every activity. She was greatly loved and will be sorely missed.

She was preceded in death by her husband, Quinn; her daughter, Nora (Walt) Persons; her brother, Leonard (Barbara) Jacobs; and her sister, Dolores (Chuck) Lengyel.

A memorial service will follow at 10:30 a.m. at the funeral home.

In lieu of flowers, memorials may be made to: Gannon Center for Women and Leadership Loyola University Chicago - Gift Processing, P.O. Box 4336, Carol Stream, IL 60122-4336 or online at https://www.luc.edu/gannon/givetogannon.