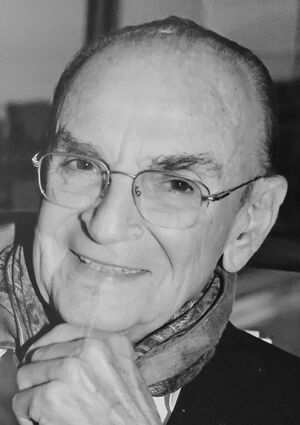 Ronald C. Katz, 86, retired executive chairman and CEO of Elkay Manufacturing Co. and a longtime resident of Hinsdale and Naples, Fla., passed away peacefully surrounded by his family on Oct. 19, 2022.

In the late 1950s Ron inherited a small but prosperous sink manufacturing company that, through his leadership, grew into a billion-dollar global manufacturing powerhouse with thousands of employees. Elkay's products have influenced tens of millions of people worldwide. The iconic water bottle filling station that many walk by every day is a product developed, manufactured and serviced by Elkay.

A man with a strong work ethic, Ron created an organization driven by simple, yet caring values. Everyone involved in the business became family. Ron deeply believed that the ingenuity, creativity and passions of the team, fueled the success of the organization. "Without our people, there would be no company," was one of his favorite statements. He had enormous respect for his family, his friends and everyone involved in the business. Ron always challenged them to do their best, give it their all and not be afraid to stick their noses into other people's business in order to make the company stronger. Respected and admired by colleagues, competitors and industry observers, Ron was beloved by his employees. No man or woman who worked at Elkay was ever allowed to call him Mr. Katz or Sir. It was only and always just "Ron." His impact on a countless number of people associated with Elkay will be his legacy.

Ron's greatest passion may have been Elkay and his family, but he also loved his cars, planes and boats - essentially anything with an engine that could be tweaked to elicit a bit more performance would bring a twinkle to his eye. Those who ever had the opportunity to ride with him will always remember the joy Ron got from a perfectly tuned engine and seeing his passengers "hang on" as he showed them maximum capacity.

A celebration of life service will be at 2:30 p.m. Sunday, Oct. 30, at Union Church of Hinsdale, 137 S. Garfield St., Hinsdale. Masks are suggested and will be available at the funeral home and the church.

In lieu of flowers, memorials may be made to the University of Chicago Comprehensive Cancer Center, Shirley Ryan Ability Lab, Chicago Hope Academy, Chicago Lighthouse for the Blind and The Service Club of Chicago.