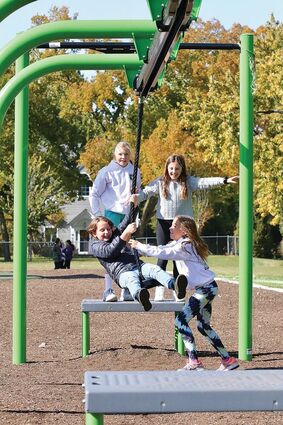 Ainslie Haunty, Chloe Downing, Grace Hanna and Emily Parwani enjoy the new zipline at Monroe School, paid for by the PTO as an addition to a new playground District 181 installed over the summer. (Jim Slonoff photos)

When classes resumed in August, students at Monroe and Elm schools all had the same idea during recess.

"The first couple of weeks there were lines of 30 kids deep waiting to get on the zipline," said Lara Massouras, president of the Monroe School PTO. "In a perfect world, we probably would have got two of them."

The new zipline at Elm, also purchased by the school's PTO, was just as popular.

"It is one of the hottest items out there. There is always a line to use the zipline," Principal Sara Olson said.

The PTOs at both schools donated about $24,000 each to add on to new playground equipment provided by the district.

"We provided the central structure and all the things that go with it and we gave them a list of menu items that if they wanted to, they could donate, that were the same standards and the same manufacturer," said Mike Duggan, the district's facilities director.

"These playgrounds are really expensive, especially when you're including the pour-in surface," said Rick Engstrom, assistant superintendent of business and operations.

That's why the district is working to partner more intentionally with the parent groups on items with a higher price tag.

"We started teaming up with the PTOs as far as the projects that are coming down the road - the bigger projects, playgrounds, MRCs," Engstrom said. "They've been great to work with on these activities. We're very, very fortunate."

At Elm School, kids were very involved in planning for the new playground, voting on the color of the new equipment.

"They were excited when it opened at the start of the school year. There was a good energy around the playground," Olson said.

Despite the cost of the zipline, the PTO didn't hesitate to purchase it.

"I felt guilty asking for it, because I thought, 'Oh my gosh, this dollar amount seems crazy.' They didn't even bat an eye," Olson said.

Elm PTO President Duane Hong said even though the group already had finished its fundraising for the year when members learned of this opportunity, resources were found.

"We were fortunate enough to have additional funds in our budget to support it," Hong said. "That definitely made it easier, and actually, the amount the district had budgeted was more than the actual cost. We're glad the cost was less than we initially anticipated."

The PTO holds a fundraiser each spring that typically generates more than half of its annual revenue. The PTO also recently has funded a pavilion in the school's prairie garden and a kickball field.

At Monroe, the PTO knew about the playground opportunity prior to the spring fundraiser it holds every other year.

"We really used this last spring fundraiser to raise some extra funds so we that we could install a supplemental piece or pieces of equipment at the same time the district was re-doing the playground," Massouras said.

The PTO also purchased three adjustable basketball hoops for the playground at a cost of about $12,000.

"We knew the ball hoops were outdated and we wanted to be able to adjust the heights of them so the younger kids, when they are out on recess, have the ability to play with them as well," she said. "That's been really great."

One big benefit of the new equipment is that it's accessible to all children, Monroe Principal Kristin Reingruber said.

"Now we have equipment that has ramps so students don't always have to climb up a ladder or climb up stairs to get on the equipment," she said.

Both playgrounds have received National Demonstration Site Certification for incorporating "play on" and "inclusive" designs. 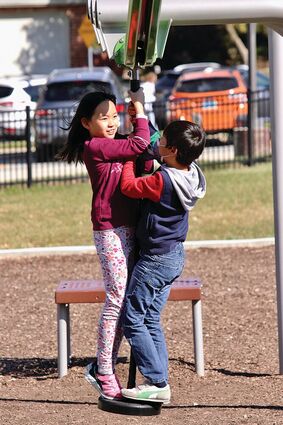 Siblings Claire and Clive Li take a turn on the PTO-funded at zipline at Elm School. Previously the PTO funded a new kickball field for students like Ryan Salhani, Ismail Urfy, Thomas Gambla and Joe Gehlmann to enjoy as well.

"Our PTO has been an amazing partner in this process," Reingruber said.

Massouras said the group is happy to have helped create a space the kids and teachers are so happy with.

"It's really a playground for the neighborhood, too," she added.

PTOs will have an opportunity to contribute when school libraries, now called media resource centers, are remodeled, Engstrom said. They will be able to buy items like LEGO tables and boards, 3-D printers and print and digital book collections to augment the space. Engstrom said the support is greatly appreciated.

"It's so nice to know we have such strong PTOs," he said. "You don't see that in a lot of school districts."