Life's curves lead man right where he wants to be 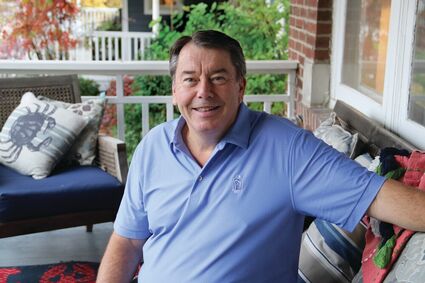 Tom Kloster's life hasn't always followed his intended path. But despite some unexpected curves in the road, Kloster isn't complaining about where the detours have taken him.

Kloster left Hinsdale Central High School with ambitions to become a veterinarian, but Kloster said one particular class was the final nail in the coffin of his veterinary career.

"I was a victim of organic chemistry," Kloster said.

With two years of college under his belt, Kloster spent the next two years working a variety of jobs, including positions as a tour guide and a caddie.

But it was his job as a bouncer at an Oak Brook nightclub that changed his life forever. That's where, through the intervention of mutual friends, Kloster met his wife, Meg.

While it certainly had its benefits, bouncer wasn't quite the career Kloster had in mind.

"I learned what I didn't want to do," Kloster said of his two-year hiatus from school. He went on to earn a degree in economics from the University of Illinois Chicago, which led to a 33-year career in finance at Northern Trust Co. - a career that lasted just a bit longer than Kloster had originally intended.

"I had hopes of working in Europe," Kloster said, and opening his own business there. But when the recession of 2008 happened, Kloster's plans changed once again.

So when post-retirement travel plans with his wife were put on hold while she completed a doctorate degree and put it to work, Kloster encouraged her endeavor and instead put his time into things he loves, like golf, cars, and fixing up the family's Hinsdale home. Over the years he has added a front porch to the 1926 house, redone the kitchen and finished the basement. His latest undertaking is the bathroom once shared by his three girls.

Kloster's parents moved to Hinsdale just in time for him to start high school. He's called the village home ever since. "It's a nice place to live," Kloster said. And while he remembers a time when neighbors didn't bother to lock their doors at night, Kloster said the village is still a safe, comfortable place full of kind, friendly people.

Kloster said he met more than a few of those people while riding the train to and from work each day, leading some neighbors to refer to him as "Train Tom."

"There's a whole culture on the train," Kloster said.

During his career in finance, Kloster helped people and families plan for their futures. As a member of the Olympia Fields Country Club Board for the last three years, he did the same for employees whose jobs fell victim to the COVID-19 pandemic. Kloster set up an emergency fund to help laid-off employees of the country club.

"That was a big part of my life," said Kloster, who also helped to bring the BMW Championship to the club in 2020.

Kloster's time on the board ends this month - just in time for him to take on a new role as grandpa to his first grandchild. As Kloster said, change is constant, and it can lead to some pretty wonderful places.