HMS principal is embracing her intro to Hinsdale 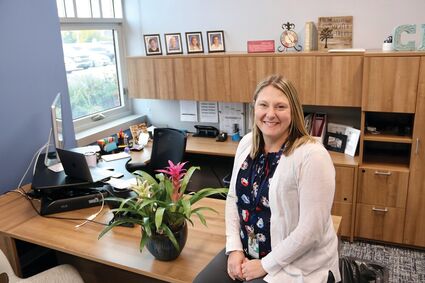 "(The Lane principal) Brandon Todd was someone I worked with back in Schaumburg, and he actually rang my phone one day, kind of out of the blue, and said, 'There's this opportunity in Hinsdale we think you'd be great for,' " Burke related.

After looking into it, she agreed.

"I was really impressed with the high achievement and the dedicated staff and community," she said of the school. "I knew that this was the right direction for my career path."

"Being in classrooms, being in hallways, being with kids, I make it point to interact in the hallways with kids and stop in the lunchroom just so I can be a part of the action," Burke said.

That opportunity to pour into young lives is what drew her to teaching originally, starting out in eighth-grade language arts in Schaumburg District 54. Nine years ago she felt led to transition to building leadership and became an assistant principal in the district at both elementary and middle schools.

"I wanted to have the biggest impact I could have on the most amount of students, and I felt I could do that from this seat much better than just my classroom seat," Burke said of the move, motivated by a desire for ongoing professional development. "When you realize the gravity of the role and how important that role is in the lives of children, I think it comes very naturally to want to continue to grow as an educator."

In a sense, the principal serves as relationship-builder-in-chief, with students, staff, families and the larger community, Burke offered.

"Until you have those relationships in place, it's really difficult to move things in the direction you want to them to," she said.

Being on the other side of COVID certainly aids in that endeavor.

"Everybody's really excited to be back and to get some of the normal practices back in place."

At home she finds cooking a healthy way to decompress after a full day.

"A lot of people that come home at the end of the day don't necessarily want to cook dinner. That's actually something that's relaxing to me," Burke said. "It's also serving a really important purpose for my family."

Her experience in the classroom equips her to be a valuable resource for the teaching staff.

"I'd like for my teachers to know that they can depend on one another and they can also depend on me," Burke said. "The most important thing that we do is ensure that students learn and grow. And the only way that happens is if all the adults are working in the right direction for kids. That will be my goal this year, that will be my goal every year."

And the early feedback has been affirming.

"There's nothing like walking down the hall and hearing everyone say 'Hey Ms. Burke!' It kind of fuels you," she said.