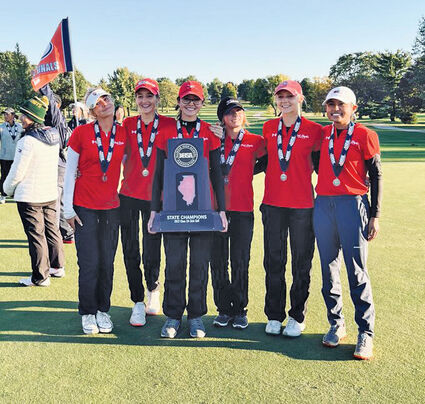 The Hinsdale Central girls golf team celebrates its IHSA 2A state championship on Saturday after an 8-stroke victory over Stevenson. It was the third state title in the program's history. (photos provided)

The Hinsdale Central girls golf team won the program's first state title in seven years at the IHSA 2A state final Friday and Saturday in Decatur.

Led by sophomore Elyssa Abdullah, who tied for second individually with a score of 142, the Red Devils posted a tournament-best 297 on Saturday for a two-day total of 600, eight strokes better than runner-up Stevenson.

"It's a pretty great accomplishment," Abdullah said. "The whole team came together at the right time."

Central was actually trailing by one stroke to Stevenson after Friday's play, but second rounds of 70 from Abdullah and 71 from senior Sarah Thornton, who finished in a tie for 18th, helped swing the tide.

"We all knew the hard work would pay off eventually," Abdullah said. "We weren't too concerned about the actual score."

"We were playing very well leading into the state tournament at the regional and the sectional," Latorre said. "We were confident with our game and our ability to score."

The only two teams that beat Central during the season were Stevenson and Glenbrook North, which finished third. Having returnees from last year's state final squad, including Abdullah, Thornton and junior Caroline Owens (tied for 33rd place with 155), was a significant advantage.

"That was big, and all of them knew exactly what to expect," Latorre said.

"Lilly was solid as a rock, she came out on fire and really helped catapult us," he said. "I felt like our depth was definitely going to be a factor because we got contributions from everyone."

"Just go out there and play our best," she said.

Not pleased with a first-round finish that spoiled what would have been an under-par score, Abdullah was determined to step it up.

"I came back and tried to make up for that," she said.

History almost repeated itself the second day when she hit a wayward drive on the 17th hole.

"But then I hit my second shot to within 10 feet of the hole and made that putt for a birdie to secure my second-place finish," she said.

Abdullah said the weather was cool and breezy but the Hickory Point Golf Course was in good condition. She knows many of her competitors from off-season junior golf tournaments.

"I was playing with some of my close golf friends in the final round," she said.

After the victory, Abdullah said they had a subdued celebration.

"I think we were mainly trying to stay humble about it," she said. "It's a really great feeling that we all came together and won."

The team's previous best finish was third place in 2017. Latorre was happy to return to the top.

"It was a pretty long stretch. It was kind of nice to get back there," he said. "It was really fun group to coach. It was a group that had really good team chemistry and played for each other."

After day one of the IHSA boys golf 3A state final, Hinsdale Central found itself down 10 strokes behind tournament leader New Trier.

The mission for day two was clear, according to head coach Serge Penksik.

"Our goal was to basically see what we can do, come out there and compete and count out the score in the end," he said.

The Devils chipped away and took the lead after the 14th hole at The Den at Fox Creek Golf Course in Bloomington. Unfortunately, they couldn't close out the rally and lost by two to the Trevians, 603-605.

"It was a good battle," Penksik said. "We made New Trier earn it."

Senior Emil Riegger, tying for third individually with a score of 147, said the team's rally effort was heartening.

"Everything was going our way, the mood switched around and everyone was starting to become more confident," he said. "We almost had a good comeback. We had a couple of rough holes at the end, but overall everyone on the team was OK with the performance."

Needing to make up ground going into the second round worked well, Riegger offered.

"I think being the chaser was easier than being the team leading," he said. "The pressure got to (New Trier) after a couple of holes and suddenly their guys stared playing a little worse."

Penksik credited their opponent for playing a "lights out" first round under cold and windy conditions. He said the All-State performance from veteran Riegger provided a spark.

"He really energized the team and helped out a lot of our guys that hadn't been there in the stretch before," he said.

Junior Jack Mulligan finished in a tie for 16th with his score of 151.

"He had a great tournament," Penksik said, adding that Mulligan can't wait until 2023. "I think he has this demeanor about him that we have some unfinished business for next year." 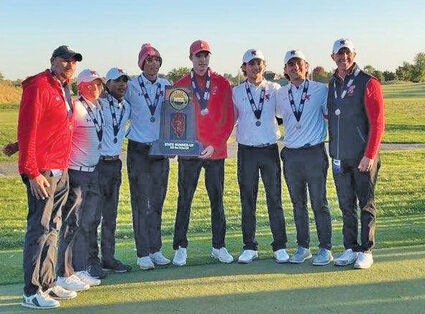 The Hinsdale Central boys golf team shows off its second place trophy after being edged out by New Trier. The team erased a 10-stroke first-day deficit before losing by two strokes on Saturday.

Penksik said the team will use the disappointing outcome as motivation.

"They felt like that had (the title) in their grasp," he said. "Afterwards, they immediately went to the putting green and started practicing.

"We're going to learn from this experience at state for next year. We're going to know what it's like to battle on the second day," added Penksik, who is in his first year as head coach. "The future looks good for us. I'm blessed and excited to be a part of this group."

For Riegger, who will play at Drake University next year, his last match for Central was one to remember.

"It was definitely a little more special than last year, and I definitely tried a little harder to do my best," he said.