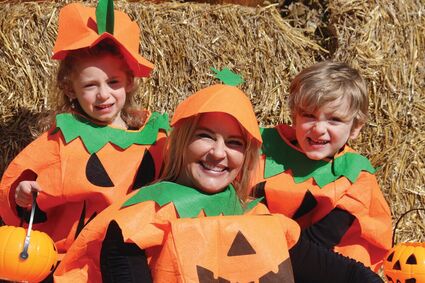 Kids and families will enjoy the police and fire open house and fall fest, both slated for this Saturday. (file photos)

Hinsdaleans don't have to look far to find plenty of good, off-screen entertainment for the entire family this weekend. The annual Fall Fest at Hinsdale Middle School, downtown trick-or-treating and an open house at the fire and police departments all take place Saturday, Oct. 15, and all are completely free and open to everyone.

"There's lots to do on the 15th," said Hilary Poshek, the village's recreation supervisor. After a few years of changes and limitations due to COVID-19, Hinsdale's Fall Fest is back in full swing from 11 a.m. to 1:30 p.m. at Hinsdale Middle School, 100 S. Garfield Ave. The event will include indoor and outdoor activities, so rain won't put a damper on the activities.

"Our goal, if weather permits, is to have inflatables outside," Poshek said. noting the village has ordered a haunted house inflatable and a 15-foot slide. But if the weather isn't suitable, the middle school gymnasium will serve as an alternative location.

Food trucks on site will include Wally's Waffles and Not Your Mama's Trailer, which is expected to offer a hot chocolate bar, among other things. Poshek said more trucks are likely to join the festivities as planning for the event continues.

The first 600 visitors to Fall Fest will receive a small pumpkin to take home to display or decorate. Inside, kids can make some fun Halloween crafts and pick up treats from vendors from throughout the village. The cafeteria also will host Istvan and his Imaginary Band from 12:30 to 1:15 p.m.

Of course, costumes are encouraged. The Hinsdale Chamber of Commerce will hold its annual costume contest, winners of which will be announced at 1 p.m., and The Hinsdalean will once again take photos of kids - or their entire families - in their costumes.

And speaking of costumed characters, Poshek said a special surprise guest is expected at Fall Fest this year, but folks have to come to the event to find out who it might be.

Children can make the most of their Halloween costumes by following up their visit to Fall Fest with a trek through the streets of downtown Hinsdale. Participating stores and businesses - noted by a sign in the window - will distribute Halloween treats from noon to 3 p.m.

Ask a cop, pet a truck

Visitors of all ages are invited to explore the police and fire stations and learn about the jobs of the village's police officers and firefighters from 11 a.m. to 3 p.m. Juvenile Officer Karen Kowal said the event typically attracts several hundred visitors eager to learn more about the village's emergency services.

Police officers will be available to answer all sorts of questions and squad cars and equipment will be on display for all to see, including a special weapons and tactics (S.W.A.T.) team vehicle and tools, Kowal said.

The open house also will include a crime scene investigation station, tours of the Hinsdale police station, a bomb squad demonstration and a visit from a K9 officer.

While there's lots to learn, there also is a lot of fun to be had, Kowal said. The event will include a bounce house, music and food provided by Page's Restaurant and the Hinsdale

"We strive to foster a great relationship between us and our residents," Kowal said.

The open house is just one way to build that relationship, and a fun way to show residents what goes on every day to keep them and the community safe.

As captain of the Hinsdale Fire Department's "red shift," Bill Claybrook is helping to plan this year's Fire Department open house. Located next door to the Police Department at 121 Symonds Drive, visitors can meet local firefighters, see the equipment they use to fight fires and learn how to prevent fires at home.

Claybrook said the live fire demonstration is always a highlight of the open house. Taking place at 1:30 p.m., the demonstration show how a home's living area would burn with and without a sprinkler system installed.

"It's to show everybody the difference between sprinklered and unsprinklered rooms," Claybrook said.

In the fire safety trailer, children learn what to do if they find themselves caught in a fire, and an obstacle course doubles as a glimpse into what firefighters might encounter while fighting a fire.

"It's a huge hit with the kids," Claybrook said.

Visitors of all ages can admire and explore the department's firefighting equipment, including engines and other vehicles, and firefighters will lead tours of the firehouse.

Homeowners are invited to bring their fire extinguishers (limit three) to the open house for testing or recycling, and firefighters will conduct demonstrations on how extinguishers should be used.

Along with safety tips and a new knowledge of a firefighter's job, children will go home with goodie bags and helmets, Claybrook said. 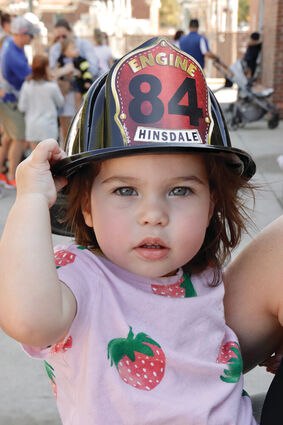 The fire open house concludes a full week of events held in recognition of Fire Prevention Week. The silent parade has taken place on the Friday night of Fire Prevention Week for 27 years, Claybrook said. Beginning at 7 p.m., fire departments from throughout the area take part in a parade down Chicago Avenue in silent tribute to fallen firefighters.

"It's a parade of nothing but fire engines and fire trucks," Claybrook said, which process down the street with lights flashing, but no sirens or horns.

Residents are encouraged to take part by lining Chicago Avenue, flashlights in hand.

"It's really neat to see," Claybrook said, and a solemn reminder of the risks that firefighters take each day to protect the community.