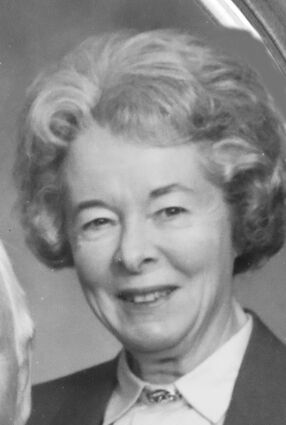 She was born Marilyn Ruth Haselswerdt in 1924 in Goodrich, Mich., and grew up with her parents and two older sisters in Rochester, Mich., where she attended the Methodist church and local schools.

Following graduation from Rochester High School, where she was class valedictorian, she attended Stephens College in Columbia, Mo., for two years. She completed her higher education by majoring in English at the University of Michigan, Phi Beta Kappa. She then learned secretarial skills at the Katharine Gibbs Secretarial School in Chicago and worked as a personal secretary for several years in that city.

At her first job at an insurance company, she met Goodwin Clark Jr., the man who was the love of her life and to whom she would be married for 59 years. Together, they raised three sons - Douglas, Scott and Brian. Goodwin and Marilyn were Hinsdale residents for 46 years before moving to the King-Bruwaert senior living complex in 2002.

In 1976, their Hinsdale residency was interrupted by Goodwin's three-year company job transfer to a town in Cheshire, England. While there, they enjoyed learning and living the English way of life, visited the British Isles and European countries, and hosted friends and extended family for visits.

Marilyn enjoyed reading and solving crossword and Jumble puzzles and was a music lover. She was a member of glee clubs while in college and later joined the Cecilians, a local women's chorus, as well as the Hinsdale Music Club.

For many years, she served as a volunteer with the Hinsdale Meals at Your Door program. She was a member of the Union Church of Hinsdale for more than 60 years and participated in the church's music ministry.

Many summers were enjoyed with family at their northern Michigan lake cottage, and she always cheered for the University of Michigan Wolverines football team. She cherished her time spent with family, as well as with her pet Boston terriers.

The family has been ever grateful for Marilyn overcoming her serious health challenges in her mid-30s while she and Goodwin were raising three young boys, with help from and thanks to friends, extended family and her faith. The Clarks, with mom Marilyn uppermost, enjoyed a wonderful family life together.

The family thanks All Trust Home Care of Hinsdale and its caregivers, especially Marsha Maxwell, for the compassionate care and companionship provided in the latter stages of Marilyn's life.

Marilyn is survived by her sons, Douglas and Brian; her daughter-in-law, Derbigny Clark; her grandchildren, Laura (Kenneth) Miller and Goodwin (Brittany); her great-grandchildren, Isabella Stephenson and Finn Miller; and many nieces and nephews.