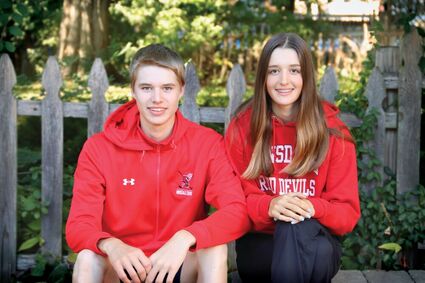 If it weren’t for Eric Riegger, the Hinsdale Central boys and girls varsity golf teams each would be short one player this season.

Emil, a senior, and Lilly, a freshman, both point to their dad as the reason they got into golf. Emil remembers some early morning play when he was just 9 and 10 years old.

“When we lived in Ireland, we used to go in the morning around 6 a.m. to just play nine holes and then come back,” he said.

That experience might come in handy this weekend as the state meet takes place in some chilly fall temperatures.

“They played in all weather,” their mom, Barbara, said. “In Ireland, if you don’t play when the weather is not great, you won’t play at all.”

After living in Germany and Ireland, the family spent four years in Washington, D.C., before moving to Hinsdale three years ago. Emil started on the varsity team his sophomore year and Lilly her freshman year, making this Emil’s third appearance at state and Lilly’s first. Emil’s fourth-place finish his sophomore year helped the team place second in 2020. Last year, he tied for 18th and the team was third.

This year the goal is clear — to win state as a team.

“That’s probably the No. 1 priority, but also to get definitely top five or top 10 in the state as an individual,” Emil said. “The team effort is much higher up than me trying to win the individual.”

The girls team, which placed fourth last year, is preparing for a successful tournament as well. The team has placed fifth or better eight out of the last 10 years.

“I’m more focused that our team tries to get top three this year and for myself individually, just score low and try my best,” Lilly said.

The two spent significant time this summer getting ready for the season, with Emil competing in national tournaments in 12 different states.

“We traveled basically all summer long and got to see a lot of states,” Barbara said. “It’s a nice sport and basically as a parent you can follow the kids on the golf course, so it’s nice.”

While Emil loved the sport from a very young age, Lilly said it took a little longer for her to catch on.

“I remember that I used to not like the sport because there was no one else to play with except for my family,” she said. “Two years ago when a friend started, I really got into it and it made me really love the sport.”

Emil, older and more experienced, has an advantage on the course. But he said his sister is catching up to him in putting and brings a particular skill to her drives.

“I usually hit it the farthest, but Lilly has some very straight drives and accurate drives,” Emil said.

Lilly said her brother is the calmer of the two on the course.

“He has been more concentrated on golf for longer and he took it more seriously, so he has a stronger mental game,” she said. “I’m working on my mental game to try to improve.”

Lilly has been inspired by her brother’s work ethic.

“I admire how hard he works when he golfs,” she said. “It kind of made me want to start working harder because I saw how good he became and I saw how accomplished he became and (how) everyone who would talk about him and how good he was at golf and that just made me try to work harder.”

Emil said what he admires most about his sister is her impressive swing.

“She has a very natural swing, which is very good in a golfer,” he said. “It’s a nice view to watch.”

With just a few days left in his high school career, Emil already knows where he’ll be playing next year. He committed Aug. 20 to Drake University.

“It feels good,” he said of having the decision out of the way. “I can finally, I guess, relax while I’m playing, not be stressed about what I have to shoot. It’s a great feeling to already know where I’m going and to play the sport I love.”

In three years Lilly might be following in his footsteps as a collegiate competitor.

“I am interested, so I’m trying to work toward that,” she said.

In the meantime, she appreciates being part of the varsity golf team.

“I really enjoy just meeting all these new people and knowing that I have the opportunity to meet new people that are interested in the same things as I am and learning how to bond as team and work together in order to perform good,” she said.

The siblings and their dad aren’t the only two golfers in the family. Anton, a junior at Central, plays golf on the junior varsity team and Barbara golfs as well, which means the whole family spends a lot of time golfing on vacation.

A favorite course for Lilly and Emil was Torry Pines in La Jolla, Calif. Emil said he would like to golf at Pebble Beach one day.

Or Augusta National, if given the opportunity.

Wherever they play, the two are likely to play well given Emil’s career best score of 65 (for the conference win last year at Prairie Bluff) and Lilly’s 72 (at White Tail Ridge last week in regionals).

Emil hopes to do even better this weekend at the state tournament at The Den at Fox Creek Golf Course in Bloomington.

“This year is extra special because it’s the last year, so we definitely have more motivation going into state and trying to win state,” he said. “Everyone on the team is really nice and we all have motivation to try to win state.”

Perhaps more motivation for Emil and his sister will come from mom and dad (Friday in Decatur, Saturday in Bloomington) cheering them on.