Standout athlete shows leadership on, off the field 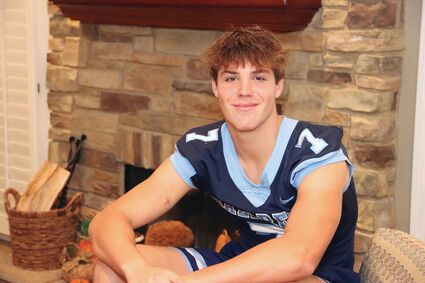 Two years ago, Hinsdale's Zach Hayes and his Nazareth Academy classmates were enduring the disruptive distancing wrought by the pandemic.

A Student Council member, Hayes and his cohorts came up with a plan to reunite the Roadrunners.

"We planned a drive-in movie night at the school, complete with popcorn and snacks," related the present-day senior. "It was kind of a cool way to get everybody there during COVID, just being able to be with friends."

Hayes' penchant for taking the initiative extends to the football field as captain of Nazareth's varsity squad.

"I think (my teammates) see me as a leader, someone who's hardworking and competitive and always giving it my all," he said.

Versatile too, as Hayes plays safety, wide receiver and place kicker. In a game a couple of weeks ago he caught seven passes for over 100 yards - as well as a two-point conversion reception - kicked a field goal and numerous extra points, and returned an interception for a touchdown.

His only disappointment? The turnover chain that he should have worn after the pick was missing.

But it didn't dampen the jubilation.

"Just being able to quiet the other team and bring energy to my team with a big play is special," he said.

Hayes recalled playing with Hinsdale Falcons in his youth, part of a packed sports calendar that included soccer, baseball, basketball and wrestling.

"Soccer was my favorite sport until high school because I always played lineman in football, but I wanted to touch the ball," he revealed. "It took me until high school to love football as much as I do right now."

He said the team's camaraderie inspires his play.

"It's a true family culture, and I like that all 11 (players) on the field need to be working together to succeed," Hayes said.

Contributing to a winning culture off the field is also a source of satisfaction, like taking time to send cards to elderly shut-ins during th holidays.

"I like the ability to be the change and take part in service opportunities," he said.

The night before a game Hayes like to spice things up with Chipotle, but then dials back his adrenaline before kickoff by listening to country music.

With several offers to play at the college level already, Hayes said he's excited for the next chapter. He plans to pursue a degree in business.

Until then Hayes aims to soak up as much of his final high school tour as he can.

"I love being able to create friendships with people from different areas and different backgrounds," he said.