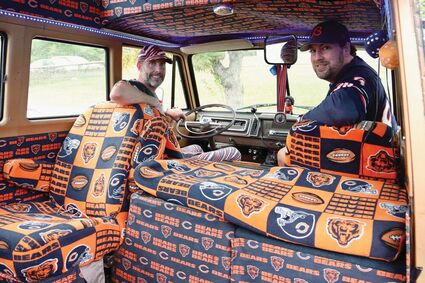 Friends Brian Anderson (behind the wheel) and Hinsdale Central grad Mike Fates hang out in the Halas Hauler while tailgating at Soldier Field before the Chicago Bears season and home opener Sept. 11. They and three other friends, including Hinsdale residents Dan Logan and Dan Hillegass, bring the blue and orange 1969 Dodge Van to every Bears home game to grill up good food and enjoy fellowship with all the loyal fans on game day. (Jim Slonoff photos)

The rain was relentless.

But it was no match for the indomitable spirit of tailgating Chicago Bears fans at the dawn of a new season. That was evident, despite the deluge, in Soldier Field's south tailgating lot before the team's Sept. 11 home opener.

In a prime spot on the western edge of the tightly packed lot sits an unmistakable blue- and orange-painted 1969 Dodge Van: the Halas Hauler.

Hinsdale's Dan Logan is one of the rig's five owners, four of whom, including him, are members of Hinsdale Central's class of 2000. They quintet acquired the vehicle in 2008 and have been a famed part of pregame festivities ever since. Above the din of pumping music and driving raindrops, Logan said the gatherings are a special time of fellowship.

"Tailgates are extremely important to use, especially now as we've gotten older, with families and living in the suburbs," he said. "It's not like our immature days back in our 20s living in the city. This is our chance to catch up with one another."

Logan said the vibe is like a big block party, with as many as 50 people congregating, at least when the weather cooperates.

"We know the neighboring cars. We all pull in together so we can spread out and have more space to work with," he said. "It gradually gets bigger and bigger."

The group acquired the Hauler in 2007 when friend Brian Anderson found in it in rough shape in Minnesota.

Until then they'd been using a parent's SUV. Well, more like abusing it.

"You cannot get pickle juice out of a car," Anderson noted.

Staining items are carefully handled around the Hauler's seats and ceiling, which are covered in team logo material. Significant funds were used to recondition the vehicle and convert it to the superfan-mobile it is today. In 2008 it was featured on the cover of the Bears pro gear catalog.

Late-season games can test its resilience.

"Sometimes it takes a while to warm up in the winter," Fates remarked.

"We've always made it on time," Anderson said, citing one exception during COVID when the backup driver tested positive.

During the week it lives at Anderson's South Loop home. In the offseason it lives at a storage facility near O'Hare.

"It's due for body work this summer," Anderson said,

Right now its body is getting soaked - along with everyone else's. Some of the more intrepid grillers in the lot continue to ply their trade, but the spread of food is a fraction of the normal volume.

Fates said his wife is "hiding out" at a breakfast spot with a friend waiting out the rain.

"I'm like, 'Just order another omelet'," he quipped. "It's better than doing this."

But the men say the rain is nothing compared to the harsh winter days when the windchill makes even the diehards think about staying home.

"This is not as bad as a January game," Fates said.

Although below-freezing temps can help with

"You can actually pack the van the night before and the ice is not going to melt," Logan said.

Another member, Joe Pedota, is responsible for creating the menu from his family's deli.

The Hauler is a Bears games exclusive but for a University of Illinois-Northwestern University contest in Evanston several years ago. The guys were cheering on the Wildcats, but the van's color scheme, which is the same as the Illini, projected a different allegiance.

As long as the group has known one another, there are still surprises, like Logan revealing that his father was a past president of the Indiana University Alumni Club.

"You're dad was the president of the Alumni Club?! How did we never know that?" Fates exclaimed.

Logan, a native of Hinsdale and longtime Bears season ticketholder, said whether or not the team is good, nothing can dampen the tailgating fun.

"This is the best part," Fates added. "Even if the Bears are bad, we all come here in the morning to hang out. This is what I look forward to."

"I don't find Green Bay fans intolerable," he revealed. "They walk by and get booed by everyone, but it's part of the fun." 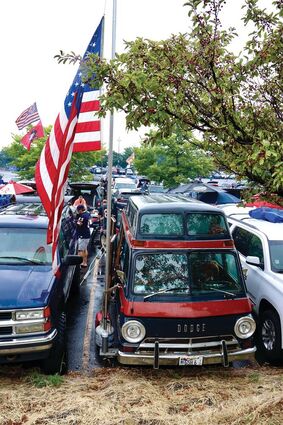 One of the guys said if they could get a wardrobe do-over, they would have dressed in flip-flops and a bathing suit. And with the beach-party-like vibe of the tailgating scene, the ensemble wouldn't have been out of place.

They all go the game and then come back to the lot afterwards for a post-party, regardless of the outcome.

"If they go 6-11 and the quarterback's decent, that's all that matters," Fates said of the hope for this year's team. (They went on to beat the 49ers on this day.)

Logan, a father of three, said it's fun seeing the next generation of fans join the party

"It's a good time, and you're starting to see kids coming now," he said.