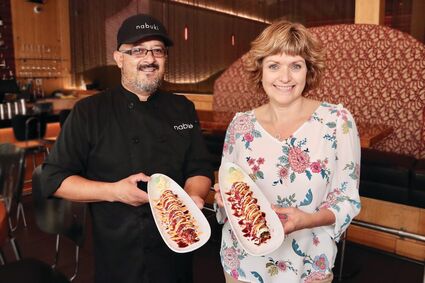 My salmon, cucumber and avocado roll with sweet potato and beet crunchies and spicy mayo, barbecue and wasabi sauce looked almost as good as Perez's - and good enough for general manager Steve DeKoker to ask if I could work a shift this weekend.

After trying numerous types of cuisine - French, Italian, Chinese - a teenage Juan Perez decided he would dedicate his career to making sushi.

"I noticed that between the chef and customer is only three, four feet away," Perez said. "You see the reactions of people when you are making the food."

The chef and partner at Nabuki in Hinsdale has been preparing sushi for more than 30 years, making him the perfect person to teach this curious reporter how to do it.

Perez doesn't follow recipes when creating the rolls at Nabuki (24 on the menu, more than 100 off), so we didn't either. We started with a piece of nori (dried, edible seaweed), a handful of Japanese rice and a warning.

"You're not going to get the roll right on the first time," he said. "It's going to be fun."

We placed the nori on the damp cutting board, textured side up. Starting in the upper left corner, Perez showed me how to spread the rice, using damp fingers and working right, across the top two-thirds of the nori. Then, working in the same direction, he instructed me to spread the rice over the bottom portion.

"Now try to fix it equal," he told me, as I struggled to keep the unbelievably sticky rice on the nori and off my fingers. I was grateful for the wet towel and small dish of water he had placed at my station, which soon had several grains of rice settled at the bottom.

We then flipped the rice-covered nori over and chose salmon for the filling. The restaurant goes through 40 to 50 pounds of fish every day, Perez said, which means the salmon, tuna and other fish coming from as far away as Portugal and Spain is used while it's fresh.

Starting on the right, we rolled the bottom of the nori partway up to the top, being careful to tuck the rice under. I couldn't quite keep up, as my cucumber strips kept escaping out of the top. With persistence, I managed to create something that resembled what was on Perez's station. Then we rolled the nori the rest of the way up, making sure the seam was on the bottom.

My roll looked better than I expected, but still nothing like what I've eaten at Nabuki. I realized why as Perez pulled out a makisu, a sushi mat traditionally made of bamboo (Perez prefers plastic). He showed me how to use the mat to shape first the right side of the roll, then the left, then the center.

"You press it with one hand, and then you hold it with the other one, like this," he instructed. "You're going to press it equal, like this."

I was able to transform my roll into a more compact, cylindrical shape.

"Not bad," I thought to myself.

"It is a perfect roll," Perez said. "You're doing great."

Then we moved on to the toppings.

Perez spread crunchy tempura sweet potato and red beet sprinkles, for lack of a better word, on a sheet of a plastic wrap for each of us. The wrap helped us move the rolls through the sprinkles, completely coating the rice. Then we grabbed the makisu mats again.

"Just to make sure, you can always do an extra push," he advised, leading me to believe my roll needed an extra push.

Perez then sliced his roll while it was still wrapped in plastic, and offered to cut mine as well. (Note: It was clear he didn't want to let me use the knife. I didn't want to cut myself, so I didn't object.)

He selected an oblong plate and arranged the slices quickly but carefully on it. We topped our rolls with spicy mayo, barbecue and wasabi sauce to dress them up - and add some kick. 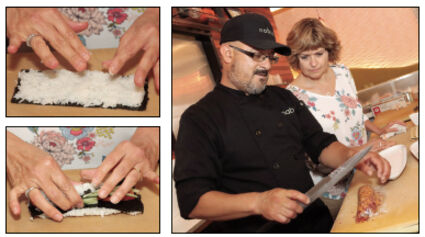 Nabuki chef Juan Perez taught me how to make a sushi roll, from spreading the very sticky rice on the nori to rolling the roll. He put his incredible knife skills to use several times during the lesson. (Jim Slonoff photos)

I was amazed at the speed with which Perez worked, but he and the rest of the staff have to keep moving to prepare the hundreds of rolls Nabuki might serve on a Friday or Saturday night.

When the restaurant opened 12 years ago, Perez noted, there were three chefs on staff.

Finally it was time to taste my roll.

I thought it was delicious, but it got even better reviews from my daughter, who was eager to sample some of the leftovers I brought home.

"You made this?" she asked, sounding astonished.

"This is the best sushi I've ever eaten," she mumbled with her mouth full.

And that's the kind of reaction that Chef Perez loves to get - even if no words are expressed after the first bite.