Crash flips car on its roof at Fourth and Bodin 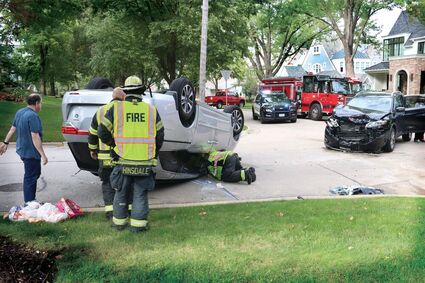 Hinsdale police and firefighters responded to the scene of a two-vehicle crash Monday afternoon at Fourth and Bodin Streets. Firefighters remained on the scene until the car was flipped right-side-up by a tow truck operator and to clean up debris. The intersection has yield signs on north- and southbound Bodin. The driver of the black Nissan was cited for failing to yield at a yield intersection, police said. No injuries were reported. (Jim Slonoff photo)