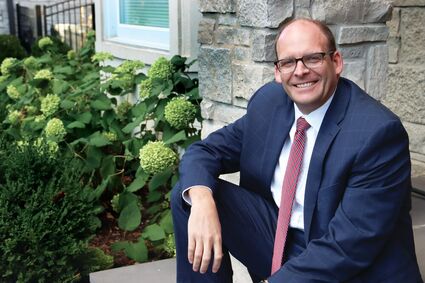 Hinsdale's Brian Stanton said anyone can train to run the Chicago Marathon, as he will on Oct. 9. "If you put your mind to it and your put your time in and do your research, you can help yourself a lot," Stanton said. (Jim Slonoff photo)

How do you prepare for a marathon?

When Brian Stanton moved to Hinsdale last year from Charlotte, N.C., the avid distance runner was unfamiliar with the area's best training routes.

So Stanton, a senior vice president with Bank of America, created his own with a pass-by tour of bank branches.

"I thought, 'Why not try something a little different?' On one my longer runs, I ran past five of them," he said, namely the Hinsdale, La Grange, Woodridge, Willowbrook and Westmont outposts. "I like new runs, new courses. I try not to do repetitive loops but areas I may not have been to before."

Naturally, Stanton will be among the roughly 40,000 taking part in the 44th annual Bank of America Chicago Marathon on Oct. 9. This will be his second Chicago race, having run it back in 2010. He's enjoyed preparing with a group of company cohorts.

"It's definitely a diverse group," said Stanton, who draws strength from both the community and accountability it affords. "We have some who do ultra races and others who are doing their first marathon, which adds a little bit of energy to the group because we all work toward getting everyone across the finish."

Stanton said having a workout routine is critical.

"If you don't have that routine and then try something new on race day, that's never a positive," he remarked.

And while it's a significant time and energy commitment, Stanton maximizes early mornings to avoid treading on precious time with his wife and three young boys.

"They think I'm a little crazy," he said of his sons' view. "But it helps teach them about exercise and putting your mind to something and achieving it.

"When I talk to them about anything they're doing, I can relate it to my marathon training," Stanton continued.

And obstacles will present themselves, whether in the form of injury or, well, literal obstacles.

"On a long run, I did have to kind of climb over construction barriers for a bridge that was under construction," Stanton said. "I just didn't want to deviate from the running plan I'd mapped out."

He was one of the first to participate in the inaugural Bank of America Chicago Running Series by completing the Shamrock Shuffle 5K in March and the brand new Bank of America 13.1 in June leading up to the Chicago Marathon.

"It was cool to be among the first crew that ever ran that series," Stanton said.

As a Chicago Marathon volunteer in 2021 he was able to cheer on those he had just started managing.

"I got to see many of my teammates cross the finish line, and I tried to illustrate leadership with my support," Stanton said.

Now he'll be the one needing a boost.

"There are so many people rooting you on and calling out your names," he said.

Stanton has even encountered Hinsdale neighbors that share his passion.

"Every time I see someone running now, I kind of think, 'Are they training for the marathon?' "