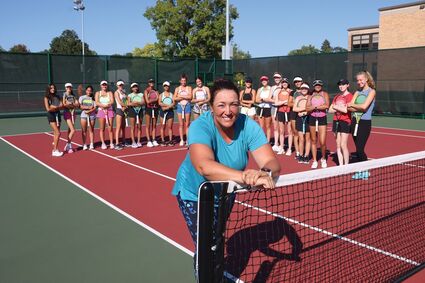 Hinsdale Central graduate and girls varsity tennis coach Shawna Zsinko said Title IX has had an amazing impact on her and the athletes she coaches. "For me, it's just been a great experience," she said "I think being a student-athlete is so cool." (Jim Slonoff photo)

Carol Bobo was a rising Hinsdale Central senior in 1972 when President Richard Nixon signed Title IX into law, requiring, among other things, equal opportunities for girls in high school and college athletics.

"At Central, when it passed, they quickly put together a swim team and they did a little conference meet, and I couldn't even swim because I was on the pompon squad," said Bobo, who graduated as Carol Lambert in 1973. "I had other things going on in my life.

"We all laughed - it was the GAA, the Girls Athletic Association. You had maybe three weeks of, 'Let's play badminton after school,' or, 'Let's play tennis.' That's kind of what it was," she added.

By the time Bobo returned to Central as an assistant coach in 1978, the girls state swim meet was in its fourth year.

"Just in that short period of time, look how quickly they organized it all and never stopped, thank goodness," Bobo said.

"I do remember that and thinking, 'This is cool. They are having sports for women,' " he said.

The lack of access wasn't considered exclusionary, McCabe commented, as there didn't seem to be much of a demand. It didn't take long to see the error of that thinking.

Bobo, who stopped swimming competitively with the Hinsdale Swim Club her sophomore year, is not certain she would have swum for Central if a team had existed. She was part of Northern Illinois University's program for two seasons, but her greatest success in the sport has come from roles outside of the pool. In her 23-year coaching career, she received a host of state and national accolades and led six teams to state titles before stepping down from coaching in 2000.

"I was very thankful that I had the opportunity to coach and to feel like I was helping to guide and help women if they wanted to go further (in their swimming career)," she said.

As a teenage gymnast in the early 1980s, Kim Estoque had no high school team to join. The Central girls varsity gymnastics coach grew up in Canada, where girls gymnastics was not offered in high school or college. She received a scholarship to attend University of Illinois Chicago based on her club gymnastics exploits. Over the years, she has seen more female athletes competing in high school gymnastics and other sports.

"It's more accepted for girls to be in sports more now than when I was doing it, especially in the younger years. I didn't want anyone to see my muscles," she said with a chuckle.

Shawna Zsinko, Red Devil girls varsity tennis coach, appreciated the opportunity to attend Purdue University on a full tennis scholarship after graduating from Central in 2001. In addition to witnessing the increase in female athletes, Zsinko has also observed earlier skill development thanks to more programs in elementary and middle school.

"We would have a few rock stars back in the day," she said. "I feel like now with the opportunities available to all athletes, you're really seeing a depth you've never seen before. I have 20 solid players."

McCabe related telling his team just last week about a book his friend wrote called "Run Like a Girl" about a young distance runner in mid-1970s Iowa who has to train alongside the boys before ultimately realizing her dream. Today's young women have no idea how many doors have been opened in the last half-century - nor should they, he said.

"They have the exact same opportunities (as boys), and my kids have always had those opportunities, growing up playing soccer and swimming to their high school sports," McCabe remarked.

Coaches emphasized that being part of team teaches student-athletes important life skills - lessons many girls did not have the opportunity to learn before Title IX.

"I think they learn teamwork and how working hard pays off in the end," Estoque said. "Those are my two big mantras. Those are two life skills that will definitely help you in life."

Zsinko said the confidence girls gain through their sport permeates into other areas.

"If you excel at a certain area of your life, I think it affects all areas of your life," she said. "You learn how to control your little environment in a sport, and then I think it just helps you deal with the world."

Sports also create community, Bobo said, and can be the foundation of lifelong relationships.

"My friend from California, she and I met at a swim meet in Illinois and have been friends for 60 years. It's a sport where you connect with people, and those people, for the most part, they become your friends, your family," Bobo said.

Title IX hasn't eliminated all inequalities and isn't enforced perfectly at the college level, the coaches said. And there's more to be done.

"I know female wrestling is starting to come up and I think that's great," Estoque said. "There are different things where they are allowing women to compete and it's nice."

McCabe said he would like to continue to see more outreach to younger girls to get them interested in sports.

"I think the more girls that become interested in it, the more there are that are going to excel," he said.

"And that's what it should be," Bobo said.