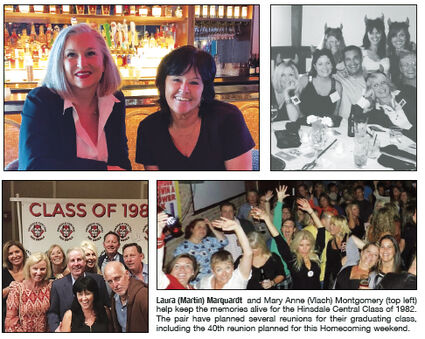 Lisa Mussman Steele isn't about to let a few hundred miles stand between her and the chance to reconnect with her classmates from the Hinsdale Central High School Class of 1982. A resident of Asheville, N.C., Steele said she's never missed a reunion, and she won't miss the one planned for this weekend, either.

"I haven't lived back in Hinsdale since I graduated from high school," Steele said.

But she's remained in touch with her Central friends, and thanks to regular reunions, she's also made new friends of her old classmates.

"Our reunion is like a wedding weekend," Steele said, with activities and gatherings planned from Friday night through Sunday, but in place of a ceremony, there's a football game.

Years ago, the weekend would begin with happy hour at Belluomini's. With the bar at 55th and Madison streets long gone, the group now finds alternative spots to kick off their festivities. This year, they'll gather at Open Door Taproom and Bottle Shop in Clarendon Hills, where classmate and reunion planner Laura (Martin) Marquardt works.

Marquardt and Mary Anne (Vlach) Montgomery did much of the planning for this and previous Class of '82 reunions. Marquardt said the two didn't hang out much back in high school but got to know one another through their reunions.

"We've had reunions about every five years since graduation," said Marquardt, who is married to her high school sweetheart and fellow 1982 grad, Peter. While many attendees are from the Chicago area, classmates also come from both coasts and places in between to join in the fun. Montgomery said her best friend from high school, Sharon (Gustafson) Paul is flying in from Tampa for the weekend festivities.

Marquardt said that just as in high school, most of her classmates' get togethers involve classmate Reese Daly and his band, known as Southern Aire in the 1980s. Daly is still playing music, but is booked elsewhere this homecoming weekend - another change from reunions past. This year's Saturday night entertainment will come in the form of miniature golf as the 1982 Red Devils gather at Puttshack in Oak Brook.

Montgomery puts her background in event planning to work every five years when it comes time to plan the next reunion. She said it's important to find a venue that's affordable and that will allow everyone to have a good time.

"I like to keep it fairly close to Hinsdale," she said, since those from out of town typically have family and friends to visit in addition to their homecoming activities.

Regardless of the venue or entertainment, Marquardt said time is always spent sharing memories and piecing together stories, some of which were long forgotten and others that are retold every time the classmates gather. They will recall after-school stops at Rexall Drugs and Baskin Robbins and before-school breakfasts at Denny's.

"We'd be at Denny's with rollers in our hair," Marquardt said, recalling how important it was to look good for the school day ahead, complete with the requisite 1980s hairstyles.

Steele said she stays at Marquardt's Clarendon Hills home when she returns to Hinsdale, giving the two longtime friends even more time to reminisce and catch up on one another's lives.

"We're just right back where we were when we were 15, 16 years old," Steele said of their visits. Class of '82 reunions end with a traditional Sunday stop at York Tavern, where friends old and new enjoy bloody mary's and lunch before heading back to the lives they've built since high school, but with new memories of their fellow Red Devils.

Montgomery said she always looks forward to her class reunions, and she would like to reconnect with even more former classmates. Of the 650 members of the Central class of 1982, only about 10 percent plan to attend this year's reunion.

She's set up an email account to collect not only peoples' updated contact information but their thoughts about the 45th reunion in 2027. She encouraged former classmates to contact her at [email protected]

"We have another five years now to plan," she said. "We would love to hear from everybody."